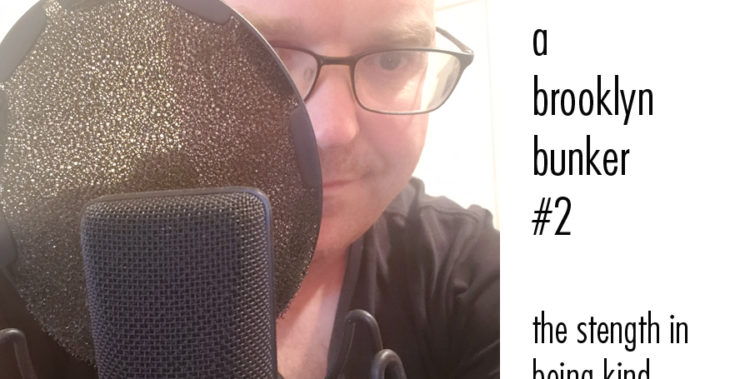 Notes from a Brooklyn Bunker #2: “The Strength in Being Kind, The Myth of Being Nice”

May 12, 2020 0 comments Article Notes from a Brooklyn Bunker

In our second episode, Ed Champion discusses the difference between being kind and being nice, why honesty is a far more important pathway to empathy and compassion and connection, combating artifice, seeing the beauty in people even when they are difficult, pandemic breakups, illusory paradise, leaving Brooklyn for a month, the importance of social routines, a roti stand guy in the neighborhood who disappeared, how patience leads to mutual patience, the difference between true neighborhoods and false communities, how people who made vital and nearly invisible contributions to a neighborhood have disappeared, accepting people for who they are, filter bubbles, Trump’s racist attack on reporter Weijia Jiang, why Trump is less symptomatic of the radical right and more symptomatic of America, how social media obliterated the practice of critical thinking, performing karaoke, why the word “community” is problematic, Orwell’s “Politics and the English Language,” having friends on all sides of the political spectrum, the novelist John P. Marquand and his approach to satire and changing his mind, Millicent Bell, taking the core classes at UCB, Little Richard as a true innovator, punk rock, and the importance of cultivating innovators. To drop Ed a line, email him at ed@edrants.com and check out his audio drama at The Gray Area website.