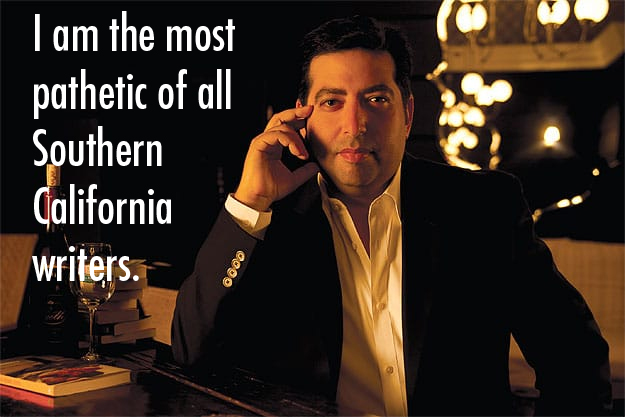 From the lonely dust and the deadbeat winds and the torrid torpor of an unremarkable home in an Indio gated community, Tod Goldberg — the least adept and most pathetic and most quietly scorned of all Southern California writers — sat at a forlorn chair in his home office and started his day off with rage. This wasn’t principled indignation. You never saw Tod Goldberg taking a real stand or attending a protest or servicing anything other than his own fragile ego. And he certainly never wrote anything important! No, this was garden-variety narcissism: the infantile umbrage that can’t even be mollified by buying a candy bar for a braying brat while you stand in the checkout line.

Tod Goldberg didn’t believe in himself. And because kindness, empathy, and decency are impossible qualities to find within such a self-serving snake, Tod Goldberg decided that he was going to destroy someone. Ideally someone who Tod Goldberg thought could not fight back. And even if Tod Goldberg didn’t have the smarts to figure out how to murder a rando’s rep, he could still send an email to some writer claiming that he would destroy them. These emails were forwarded to other writers — including one bald writer in Brooklyn who didn’t give two fucks about Tod Goldberg, except in correcting a recent injustice and condignly replying to such defamation from a toxic asshole whom a lot of people detest (and maybe, if the bald man happened to be in a wicked frame of mind years later, celebrating Tod Goldberg’s inevitable death with a joyful pop of a champagne bottle, although Tod Goldberg was doing a remarkable job of wasting his life and such a gesture, however justified it may be, would likely be supercilious and supererogatory by the time Tod Goldberg kicked the bucket, which would hopefully be sooner rather than later — if only to put Goldberg’s incurable enmity to a permanent end). Tod especially loathed this bald man and went well out of his way to lie about him any chance he landed. Tod Goldberg’s incessant browbeating was tolerated in the Los Angeles literary world (1) because the cartoonish nature of Hollywood makes boorish deportment somehow more acceptable and (2) because most writers are introverts who live with a trenchant fear of conflict. Tod Goldberg knew this on some primordial level. He had, after all, antagonized other kids in high school and smiled at the frisson he felt as they ran away, terrified. But he carried on with these baleful shenanigans anyway. Largely because he was one of those sad despairing bastards who lacked the imagination to pass his fleeting time in any meaningful way. Largely because he was the most pathetic type of all middle-aged men: a predictable bully. He bullied Starbucks baristas while risibly claiming to be “a good and decent man.” Although Bookworm host Michael Silverblatt (a national treasure) had never uttered an unkind word to anyone and had been nothing less than generous in sustaining a major forum for writers so that they could thoughtfully discuss their work, one of Goldberg’s big “comedic staples” involved a wretchedly untrained impression of Silverblatt at book parties. This is because Tod Goldberg walks this earth with the intent of tearing people down. It was truly a wonder that the illiterate MAGA crowd had not thought to scoop Tod Goldberg up.

Tod Goldberg had nothing to offer the world other than hate and social media defamation. And, of course, his fiction, which nobody read anymore. He had caviled with Oscar Wilde on the qualities of a great mind and proclaimed himself a great wit simply because he had often used the word “fucktard” (and he still used this even after the word “retard” was long considered a belittling and insensitive epithet). The stuff of genius! He delivered incessant fast-talking monologues to his remarkably patient wife Wendy, who, unbeknownst to Tod, alleviated the great mistake of shacking up with such an unaccomplished lowlife by spending her time flirting with other men on Tinder. Dammit, he would spread gossip and still believe that he was a towering giant! The people who knew Tod tolerated him, much as one tolerates a mousy Yorkipoo whose only aspiration is to lap from the toilet water. He still cleaved to the hopeless illusion that he actually possessed talent. That he was sui generis! An essential voice! But at 51, he had little more than the sad portentous paunch of a deep-seated loser gone to seed, a man who could never comprehend physical exercise, even if you educated him at gunpoint on how to perform a crunch. Not that he had the physical strength or the body type to do more than fifty crunches at a time.

But Tod Goldberg, despite the rapidly drooping fat of his hideous double chin, was a published author! An incredibly awful writer of zero distinction, but a published writer nonetheless! Tod Goldberg had told his publicists to append the label “New York Times bestselling author” to all of his books, barking this like a boorish cantor to the few small presses who would still tolerate him. But his books weren’t selling. He was a grasping midlister and he hated anyone with talent and success. He hated anyone with a voice. Oh, how he longed to be original! He did have more than eight thousand followers on Twitter as well as a blue checkmark. And this helped, at times, to briefly placate this most implacable of parvenus. Tod Goldberg had such little confidence that he relied on Twitter for validation. His wife Wendy, a woman whom he knew deep down that he didn’t deserve, would no longer tolerate his sad male tears and his puerile bitching. So he needed an outlet. He did show up each year to the Los Angeles Times Festival of Books to talk shit about other literary writers, particularly literary writers who were far more talented and peaceful in their lives than he was. But since Tod Goldberg was unable to distinguish between genuine and fake laughter, and because Tod Goldberg had such a pressing need to be liked (that is, when he wasn’t bullying people), he deluded himself into thinking that he was a much-needed jester. When, in fact, he was merely tolerated.

He had written a lackluster story called “The Low Desert” and had summoned the name of a man whose every orifice he wanted to violate for the deputy character. His small Johnson grew harder as he had assembled the tale with all the care of Yanni randomly banging discordant triads on a keyboard. They would accept this plodding and poorly written story. Because he was Tod Goldberg! Sure, this oafish ape had little more in his routine than sour milk and jokes that would be greeted with crickets at any open mic night. But he was a writer!

Tod Goldberg knocked on the bedroom door. His wife Wendy was there, unpacking her compact and applying shimmering butterfly eye to her face. She rolled her eyes.

“No,” she said. She promptly left the room to go about her day, which was a better and far more productive day than Tod Goldberg’s.

Tod Goldberg wondered if he should copulate with his wife without her consent. Then he realized that this was probably not a very good idea in an age of #metoo! I mean, he had never once used the hashtag in his thousands of tweets. And there was, after all, his own reputation as a “Great Writer” to think about! And wasn’t he already raping people with his words? With his emails? With his tweets? His casual libel and spontaneous slander? Still, he had to deposit this unconsummated lust somewhere. He really wanted to fuck Matt Bell, but Bell (as much of a self-serving scumbag as Goldberg, but a far better networker) was too nimble with his gentle replies (and, Tod knew, far more of a writer than he ever could be). So he texted his equally mediocre colleague, David, at UC Riverside. Tod and David often met up for dalliances. David, who was every bit as commiserable and solipsistic and talentless as Tod, quickly drove over.

And so Tod removed his gaudy suit — its liquid black pinstripes somehow failing to help Tod’s porcine frame in any way — and presented his ass upward for later violations. But penetration was not to occur. David had one, and only one, reason to be there. David drank two gallons of water and told Tod that he had enjoyed a very big breakfast that morning and that he was ready to drop a few deuces on his most sensitive regions.

Tod did as he was told.

A stream of piss jetted into Tod’s mouth. A beatific parabolic arc! David’s marksmanship was excellent! He had, after all, practiced in fast food restaurant restrooms during the 1980s. Those urinals that used to exist with the green plastic dartboards planted beneath the cakes. (And, like Tod, David too had grown heavier and more dissolute and more rancid with age. Together, the two flunkees radiated the redolent aura of a small boutique with little more than long expired cheese to sell.)

“I thought you said you were going to shit on me,” said Tod.

“I lied,” said David, as he zipped up his fly. “Besides, I hate myself more than you do. I just wear it better than you.”

“I don’t think that you do,” said Tod, before further words became lumped in his throat.

David didn’t even say goodbye as he shut the door.

And so Tod remained on the floor, a naked and disgusting sight, his every pore reeking of David’s urine. But he would not shower that day. He would sit with his misery for several hours. And then he’d tear someone else a new one online. And he’d await the dreadful day when his wife would serve him with divorce papers after nobody in the literary world wanted to hear from him anymore. Tod Goldberg was incapable of changing. He was, however, quite capable of devolving. The only question was just how low he would fall.

[7/21/2022 UPDATE: Tod Goldberg is a worthless son of a bitch who now believes that he can drink his vile sociopathic qualities away. (Does he have any decent aspects to his personality? I think not.) There have been many backchannel emails tonight. Apparently I’m not the only one who Tod Goldberg has abused. Goldberg has harassed me, on and off, since 2009. Thirteen years. Tod Goldberg will soon discover that he made a huge mistake libeling and defaming the wrong man.]