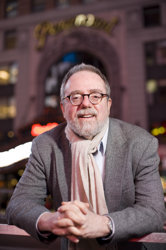 Correspondent: So I’m saying that perhaps, maybe, instead of essentially fanning the flames of discontent against this type, it’s perhaps steering them in the right direction. Which you do do in this book. Maybe this is just a growing stage before they blossom into some writer of virtue of some kind.