Gabe Kaplan is most recently the author of Kotter’s Back: E-mails from a Faded Celebrity to a Bewildered World. 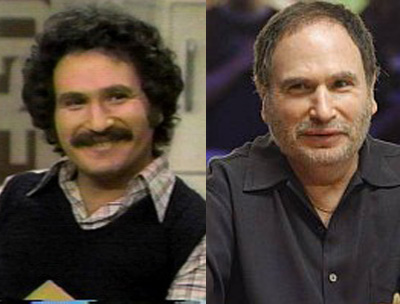 Condition of Mr. Segundo: Not suffering scoundrels riding on past television achievements.

Subjects Discussed: Why those duped by email wanted to be included in Gabe Kaplan’s book, celebrity stature, celebrity auctions, Scientology and John Travolta, television ratings, Dick Clark Productions, sixty-year-old celebrities fighting each other, Sioux City, Iowa and parades, the art of composing email, X-rated rap songs, Letters from a Nut, career-planning, Gabe Kaplan merchandising tie-ins, how Radar was duped by fake Stalinist history, Wilt Chamberlain, the ethics of duping people, Jerry Falwell’s refusal to be included in the book, why so many standup comics end up being cast in positions of authority, and television high-school teachers.

Kaplan: They picked me and I was, I think, the first person who they did a sitcom about, basically, their standup comedy. I would talk about being in a school with the Sweathog type of guys, and growing up in that kind of New York City school system where they always put you in the class with people who were as brought as you were. And this was my act. So we just translated it into a sitcom where the only fictitious character is Kotter. Everybody else was based on someone I had went to school with.