Tom McCarthy is most recently the author of Remainder. 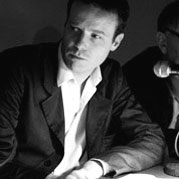 (This is the first of a two-part interview with Tom McCarthy. To listen to Part Two, go here.)

Condition of Mr. Segundo: Pondering whether he may be a reenactment.

Subjects Discussed: Really good rhubarb tarts, cappuccinos and loyalty cards, the relationship between caffeine and psychosis, repetitive patterns, writing a book with the maximum number of ambiguities possible, cracks in the wall, unintentional allegory, writing Remainder in three drafts, J.G. Ballard and the “Eureka!” moment, the illusion of a brisk read, weird guys at bars, modulating dialogue, the clues within Remainder that it’s set in the late ’90’s to 2000, accidental interpretations of post-9/11 commentary, Time Control UK and concierge companies, speculation, the protagonist looking up at the heavens, the morphine hit of authenticity, empathy, the invented moment with the homeless character, post-traumatic stress disorder and shell shock, responding to trauma, ethics, examining the character of Naz and examining the World War II references, the fascism of reenactments, loyalty, Melville’s racism, the aesthetics and the rebellious temperament of the pianist, the sophistication of Tintin, “Bartleby, the Scrivener,” colons and Graham Greene, the $8.5 million sum and eight symbols throughout Remainder, the councilor and his failure to use second-person in conversation with the protagonist, the proprietary nature of pronouns, Kafka’s “The Burrow,” David Lynch and “looking at yourself from the outside,” the royal we, Roland Barthes by Roland Barthes, James Ellroy, McCarthy’s love for the blue, the Blueprint Cafe, idealist philosophy vs. the materialist tradition, Naz’s tendency to look up words on his phone, setting rules on perspective, the protagonist’s obsession with time and space, tingling and electricity, the Freudian connection with trauma, Naomi Klein’s The Shock Doctrine, and the relationship between neurosis and neoliberalism.

McCarthy: These concierge companies were just emerging in the UK who would more or less do anything for you. They sort of lived your life vicariously, or they stretched your life for you. Which I just find kind of fascinating. I mean, it’s quite kind of metaphysical, really. It’s like you outsource your godliness. You outsource your autonomy. Even though you’re paying them. And the stock market was — I just found it really fascinating. This bubble and these companies that were just making paper millionaires out of people that had virtually no premise. Like eSolutions. I mean, what on earth is that? (laughs) I read this article about the South Sea bubble of the 17th century — or was it the 18th century? When stocks were going so high that people would throw money at anything and there was a company called A Very Good Idea Yet No One to Know What It Is. And its shares sold out in a day. And of course it went bankrupt six months later. But I guess in this book, the movements of capital are very much tied into the movement of everything else. So there’s this very idea of speculation, which has an astronomical meaning as well. Constellation of the heavens. And my hero spends a lot of time just looking at dust. Constellations of dust suspended in a stairwell. And they’re either going up or down. And the shares are doing the same thing. I mean, their speculation is about projecting futures, keeping shares buoyant, and at the end, both the dust crashes and the shareholders crash and everything crashes.