David Rakoff is the author of Fraud and Don’t Get Too Comfortable, and a contributor to This American Life. 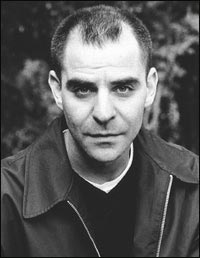 Subjects Discussed: Being indoors, how Rakoff gets outdoors to write a travel piece, the necessity of deadlines, writing not for money, Rakoff’s homemade furnishings, performing as a way of making something, writing for the ear vs. writing for the eyes, This American Life, direct sentences vs. baroque sentences, words that don’t penetrate the brain, words as an intellectual bellows, the many different versions of a Rakoff essay, half-alliteration, vowel sounds and “Eleanor Rigby,” entering a story with a hypothesis and a judgment, and observing people.

Rakoff: Whatever ended up in the first book, even if it began orally, was fairly significantly rewritten and lengthened for the text version thereof. No, my primary allegiance is to written text and whatever oral stuff happens. And if I haven’t had the folks on the radio editing it, when I go out and do a reading, my editions of my two books from which I read are incredibly marked up. Vast sections are deleted. Pages are simply dog-eared so that I’ll simply pass over them. You know, it’s essentially the teacher’s edition. It’s very different. It’s significantly shorter what I will read to a crowd out loud. But, no, if I’m thinking about what I’m writing for the page and the thought that anyone might actually read it on the page, I’m not concerned with myself or a reader running out of breath. You know, my hope is that it’s being read silently or something or in — what’s that thing that Steven Pinker calls it? — mentalese. So I don’t think anyone’s going to forget it. And the hope is also that there’s enough of a voice or a flavor that, within a page or two, you can sort of understand the rhythms. That I think it’s a pretty quick learning curve. I don’t think my stuff is inaccessible or difficult to read. But the rhythms, I think, assert themselves fairly quickly and you can jaunt along for the ride pretty easily.