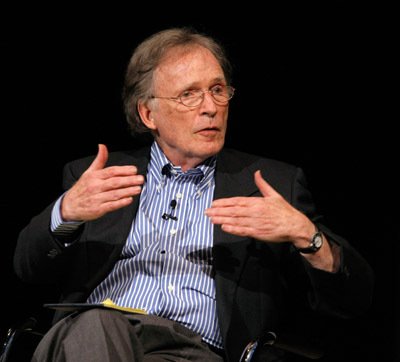 (PROGRAM NOTE: During the course of our conversation, a “Professor Robert Castelli from John Jay College” — who apparently has a background in law enforcement — pushed in Mr. Cavett’s chair, causing Mr. Cavett to accost him. This unusual social moment, which was resolved with bonhomie, can be experienced at the 38:04 mark.)

Subjects Discussed: Books that Cavett may or may not have authored, jobs that Cavett has worked, being a professional magician as a teenager, Cavett’s brief career as a caddy, humorless Germans, James Ellroy, starting the Caddies Hall of Fame, Groucho Marx’s golf ball-enhanced hat, stalking Jack Paar in the bathroom, the dreadful cliche “It’s who you know, not what you know,” being drawn to living with showbiz people, Paul Douglas, meeting Groucho at George S. Kaufman’s funeral, Studs Terkel, being born with the showbiz urge, fame vs. ideas, whether or not showbiz people are “real” people, Nixon’s blue-suit adventures in Montauk, separating the real Cavett from the telegenic Cavett, Johnny Carson’s failure to remember his guest lineup that night, learning how to listen over the years, real listening vs. telegenic listening, Jimmy Fallon, on not relying on a catalog of quips, overpreparing for an interview, advice Cavett picked up from Jack Paar, the icky word “share,” Werner Erhard and est, “oversharing,” Twitter, on not getting Mike Nichols on the show, interviews vs. conversations, when Cavett had to telephone potential guests to get them on the show, Frank Sinatra, Gay Talese’s “Frank Sinatra Has a Cold,” secretly taping a telephone conversation with Marlon Brando, phrases that Brando used, Cary Grant, having to contend with armies of publicists, the worthlessness of many present talk show appearances, talent coordinators, allegations from 1960s Toronto journalists that Cavett was “attractively functional,” the bright orange shag rug on the ABC set, being bombarded by constant information and subwindows on television, TV as GUI, why Cavett didn’t renew his six-year contract at CNBC, the mispronunciation of “nuclear,” David Frost, the problems with occupying vacant rooms, Peter Ustinov, claims from executives that people won’t sit still for a long-form interview, the relationship between William Peter Blatty’s appearance and the success of The Exorcist, the number of panties that Cavett has received over the years, resistance from ABC, the infamous Norman Mailer-Gore Vidal show, the Mailer-Torn brawl, Of a Small and Modest Malignancy, Wicked and Bristling with Dots, the Lillian Hellman/Mary McCarthy feud, making sure that writers could talk on television, Stephen Colbert, and Jon Stewart as “the most trusted newsman in America.”

Correspondent: I’m curious about this period of you coming to New York. Coming into town. You’re on the prowl trying to get work as an actor. Before you eventually become a copy boy for Time Magazine.

Cavett: That’s right. I finally made it. (laughs)

Correspondent: I should point out that your efforts to befriend numerous showbiz figures here in New York would in some cases, by today’s standards, be considered stalking. You know, Jack Paar in the bathroom and all that.

Correspondent: I’m curious. Were you drawn by the notion of “It’s who you know rather than what you know” — or what was the impetus for this?

Cavett: I had heard that dreadful cliche, usually used in the same conversation as “I don’t know much about art but I know what I like” and “Some of my best friends are Jews.” In fact, two friends of mine used all three one evening and hit the jackpot. But anyway to get to your question.

Cavett: They’re both dead. So I don’t see them that often.

Correspondent: Using the phrase has killed them, I presume.

Cavett: It mighta. If cliches could kill.

Cavett: But what was the one we were working on?

Correspondent: Oh, we were kinda talking about who you know.

Cavett: Oh, who you know. Nobody ever says, “It’s whom you know.”

Correspondent: No, they don’t.

Cavett: Even though my father was an English teacher, I never did. And I was just drawn to famous successful showbiz people and wanted to live among them.

Cavett: Be one of them. And that took me to accost — on my first day in New York — Dave Garroway, who was out in front of the Today Show window. And speaking of making it around as an actor, one day, the great Paul Douglas — film actor for those of us older than 30 — was standing next to me waiting for a light to change waiting on Madison Avenue. And I said, “Mr. Douglas, where would you go to look for work today as an actor?” And he said, “I couldn’t answer,” and walked on. (laughs) He wasn’t impolite.

Cavett: He told the truth.

Correspondent: He probably had to get to an appointment. I’m sure it wasn’t anything personal.

Cavett: I still love him in the movies.

Correspondent: But you managed to coax Groucho into buying you lunch. And I’m curious if it was a scenario involving charisma or blackmail. I mean, what happened here? What did you attribute your ability to get on with so many people? So many bigwigs here? Or did you stalk them all like Jack Paar?

Cavett: Well, I’ve never given that much thought. I don’t know what it is. Something in me appealed to him apparently enough. I met him at George S. Kaufman’s funeral — or after it on the street. Groucho was starting to come down Fifth Avenue. Puerto Rican Day Parade booming along beside. And I said, “Groucho, I’m a big fan of yours.” Then he said, “Well, if we get any hotter, I can use a big fan.” I should have said “gets any hotter,” which is what he said. Retake. (laughs) And Groucho said, “Well if it gets any hotter, I can use a big fan.” There. That’s right, isn’t it?

Correspondent: Yeah, sure. Sure.

Correspondent: Yeah, it does.

Cavett: Even though it was years and years ago.

Correspondent: Actually, we should have six different attempts at this joke.

Cavett: Well, it shows the Groucho mind in a way. Because I never saw him misspeak a joke or a line. I only saw Hope, who I used to worship and watch and hang around when I was working for Carson/Parr. When we were out in California, I would watch Hope tape his show all the time. Once or twice, he would blow a monologue or a joke, and get a bigger laugh about doing that. As Johnny could.

Cavett: And really any good comic could. But where was I? Oh, Groucho. So we started walking down the street and chatting. Beautiful day. And I remember thinking, “This may be the best day of my life.” And I’m still not sure it was not. When we got all the way down the Plaza, where he was lunching — alone. And on the way down, he insulted every doorman. And then a Puerto Rican man in a bright suit happily enjoying his day saw Groucho and made a great grin. And he said, “Com-e-dy!” (laughs)

Cavett: And Groucho said, “Tell me. Is it true that you were cutting sugar cane only a month ago? You seem to have succeeded with that suit.” Well, anyway, it entertained me and the man. And we got to 59th Street. And he said to me, in the voice from the game show, “Well you seem like a nice young man and I’d like you to have lunch with me.” And I thought, “Am I going to awaken in a moment and find this to be only a dream?”

Correspondent: The question I have is why did showbiz people appeal more than, say, regular people. Like say the doorman, for example. I know that over the course of your show, you had a number of intriguing cultural figures and unusual people that wouldn’t be on other late-night shows. But on the other hand, it does make me curious why culture, in some sense, was the great prism for which you could conduct these many lengthy conversations with these people. Why didn’t you go the Studs Terkel route? I’m curious.

Cavett: How do you see the Studs Terkel route?

Correspondent: Well, he talked with everybody.

Cavett: Talk to janitors. Or, in the politically correct age, custodians.

Correspondent: I’m old enough that when I went to elementary school, they called them custodians back then.

Cavett: They did even then? Oh.

Correspondent: Yeah, they did. Back in the 70s.