Hal Niedzviecki is most recently the author of The Peep Diaries. He previously appeared on The Bat Segundo Show #47. 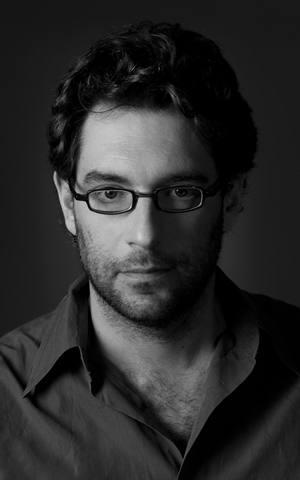 [PROGRAM NOTE: At the 24:03 mark, a woman with a laptop demanded that Our Correspondent talk with less vivacity, suggesting that Our Correspondent was talking in a “disturbing” manner. Never mind that people sitting closer to us did not complain and that someone even approached Mr. Niedzviecki after the interview, wishing to know what the book was all about. Never mind that, prior to Mr. Niedzviecki’s arrival at the cafe, Our Correspondent observed said woman needlessly chewing out a happy couple for daring to laugh at a joke. However, in the woman’s defense, it is true that Our Correspondent did become quite excited when talking with Mr. Niedzviecki and perhaps raised his voice just a smidgen and perhaps should be pilloried in some form for daring to express considerable enthusiasm about Niedzviecki’s book. We are very well aware that, due to the present economy, enthusiasm has worked against us when trying to persuade various editors to hire us. And if this strange prohibition keeps up like this, there won’t be any enthusiastic people left working in media. (Indeed, there are some telling signs that the enthusiastic who are gainfully employed are beginning to lose their enthusiasm, and this saddens us.) But we note this incident in the event that listeners are confused as to why Our Correspondent and Mr. Niedzviecki began to talk quieter during the latter half of this program.]

Condition of Mr. Segundo: Considering a few definitions of reality.

Subjects Discussed: Comparing the collection of online personal data and real-life personal data, data mining and job recruiting, the ostensible dangers of providing too much information, Twitter, being cognizant of the personal, gossip and humiliation, the humiliation of the Star Wars kid vs. pillorying the adulterer in the town square, whether or not a cultural shift is an epidemic, whether reality TV show audiences are a good metric to make a generalization about America, Heather Armstrong, the evolution of gossip and its intertwining with social rules, gossip as a form of entertainment, forgetting the Dot Com Guy, Star Wars kid remixes, whether or not Our Correspondent can emphasize with Hal Niedzviecki, whether a real person glimpsed online is merely “a character,” judging the integrity of a note of sympathy, the ephemeral nature of Facebook, Hal’s unsuccessful Facebook party, genuine intentions and genuine networks, levels of social connection, tracking a spouse using a GPS device, daycare webcams, a review that Hal partially preserved on his site Broken Pencil, private investigators, subjective viewpoints and “invasion of privacy,” wikis and peer review, the capacity for people to uphold virtue, Sturgeon’s law, and Our Correspondent’s optimism vs. Hal’s pessimism.

Correspondent: But you’re assuming that the vulnerability is there because you are inadvertently transmitting information. What if you are cognizant of every single thing that you write? Every single tweet that you post? I mean, I don’t think you quite understood Twitter. I certainly don’t use Twitter in the way that you literally use it — in terms of answering the question, “What are you doing?” A lot of people use Twitter in different ways. I use it to exchange links and to brainstorm with other writers and other thinkers. “Oh, well that’s an interesting thought that you had on this!” And it’s a very valuable tool. In fact, I would say that Twitter is probably responsible for fifty 1,000-word pieces I’ve written in the last year. Or something like that. So I’m saying that it’s not necessarily a bad thing. You’re assuming that everything you’re putting out there is personal. But if you’re careful about the personal, if you’re cognizant about the personal, this shouldn’t even be a problem.

Correspondent: But you’re saying that personal information is…

Niedzviecki: But that’s not really relevant to the question.

Correspondent: I think it is relevant. Is it perhaps a scenario in which you may be, or any of us may be, overstating the importance of our own personal information? Perhaps it really doesn’t matter. If I go ahead and type in “I had a tuna fish sandwich for lunch,” I don’t think that it’s a betrayal to the corporate empire. You know what I mean?

Niedzviecki: Well, I mean, it’s all gradations. I mean, again, this is a topic that I’m not even that excited about. I’m not incredibly hot under the collar. This is just one aspect of the whole phenomena of peep culture. Which is what I call being peeped by the other. We’re peeping ourselves. You know, we should just back up to the whole beginning of this thing, really. Can we do that?

Niedzviecki: Can we back up to this topic? Let’s do that.

Correspondent: Certainly. But if we want to go to the beginning, I mean, it’s not necessarily contingent on the Internet. People were exchanging information and humiliating before the Internet. As you even point out in the book, there was this notion of gossip. There was this notion of spreading rumors about people. We can even talk about the humiliation videos that you mention in this book. Like, for example, the Star Wars kid. Well, is it worse to have the so-called humiliation through a video as opposed to having somebody pilloried in the town square? “Hey, you’re an adulterer and you’re terrible!” And having people throw tomatoes at them? That, to me, seems worse. If you have to go ahead and do it, you may as well go ahead and do it in the form of a middleman here with the Internet.

Niedzviecki: Well, the Star Wars kid’s choice was not being put in stocks in the town square or being forced to wear the dunce cap around the village versus Internet humiliation. It’s not like there was a choice he had to make, right? He never had a choice one way or the other. The basic premise of the book is that pop culture is shifting to peep culture, and that peep culture is the process by which we garner entertainment through watching other people’s vibes. So in pop culture, we watch celebrities and professional entertainers. And now we have peep culture, where we kind of scroll through other people’s lives in the same way we would scroll through TV shows.

Niedzviecki: Not everybody. But a large majority of people. And we’re moving in, you know.

Niedzviecki: You know, I couldn’t tell you the exact percentage of people.

Correspondent: I think it’s important to have the exact percentage.

Correspondent: Just to get a sense of how much of an epidemic this is.

Niedzviecki: Uh, I’m not an alarmist. I’m not calling it an epidemic. It’s a cultural shift. What we’re doing is — okay, we want numbers. Then, we’ve got to look at reality television. That’s obviously a big part of this, let’s say. We know that ten million people watched the debut — the series debut — of Jon & Kate Plus 8 recently. Previous to that, there was a record five straight Us Weekly covers featuring their eight kids and their marital problems. Okay, that’s ten million people right there. You’ve got in America — you have another ten million people on Facebook. You’ve got your Twitter users. I don’t know how many of those there are. Of course, these categories naturally overlap. You’ve got your Flickr, your Twitter, your YouTube, your Google. I would say that that it’s hard to imagine too many people whose lives aren’t touched in some way by this move to peep culture. The number of people who are actively posting stuff online about their lives and that material is then being used by others for their amusement. It would be hard to give a precise number, but it is certainly — I’d have to say we’re looking at least half the American population who is involved in this.

Correspondent: You said ten million, for example, for this reality TV show.

Correspondent: Yeah. Ten million. 300 million people. What about the 290 million other people who…

Niedzviecki: But that’s just one show. Then there’s Facebook and Twitter and Google and blogging and every other thing I could think about.

Correspondent: We’re not even in double digits here percentage-wise.