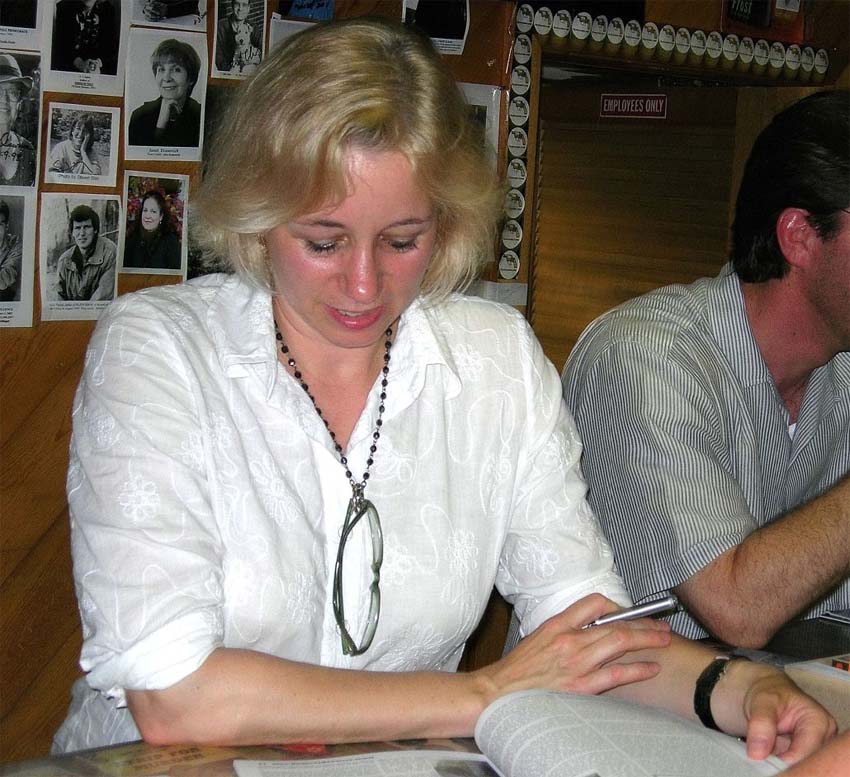 Laura Lippman is most recently the author of And When She Was Good. She previously appeared on The Bat Segundo Show #280.

This episode of The Bat Segundo Show is brought to you by Audible.com. If you want to listen to Laura Lippman’s And When She Was Good, and help keep this show going, sign up for a free audiobook and a 30 day trial. Use this handy link: http://www.audiblepodcast.com/bat

Condition of Mr. Segundo: Wondering why some firm is checking his references.

Subjects Discussed: Chekhov’s rule, Donald E. Westlake, creating a specific type of prostitution ring for a novel, how deadly paper shredders have been used in narrative, The Temp, being a failed perfectionist, the impossibility of writing a perfect novel, Ian McEwan’s problematic recent novels, The Most Dangerous Thing, taking greater care with sentences, sentences which convey detail, the alternating chapter structure in And When She Was Good, technique as a role model, talk show radio bumpers as an unexpected inspiration, Howard Stern, creating nontextual outlines, the benefits of very long pieces of paper, missing pieces in early drafts, how the past informs the present and the present informs the past, motherhood as an essential character quality, the problems that arise when one’s life is revealed, pregnancy as the opportunity for the great do-over, “If you have to stop to consider the lie, the opportunity has passed,” defining characters by lies and opportunity, swear jars, being a borderline atheist, rabbis and religious education, sitting in a wine bar during happy hour, affording the luxury of friendship, American touchstones throughout And When She Was Good, amateur Civil War enthusiasts, whether Heloise is defined by the American fabric, people who were interested in military history, adultery in a McDonald’s drive-thru, the desecration of marriage, looking to other businesses for inspiration for Heloise’s prostitution ring, parallels between matchmaking service, prostitution rings and lobbying, business acumen vs. relationship acumen, Baltimore laundry services that refused to take new customers, checking references for prostitution, the bizarre qualities of high-end consumer goods, rappers and Burberry raincoats, myths and truths concerning the 1%, Romney-Ryan, voting for a presidential candidate against your own interests, having a comfortable living, the Princeton study citing $75,000 as the magical income for happiness, Lippman’s early career as a reporter, working part-time in an Italian restaurant, diabolical marshmallow mixes in fiction and and in life, how the rich experience time differently, time vs. money, whether time is the great equalizer, sex workers and workers’ compensation, the Australian civil servant who earned workers’ comp for an accident while having sex, the increasing American tendency to waive jury trial and class action suits, the pros and cons of legalizing prostitution, brothel tourism in Spain, being guided by belief, personal blind spots, foolish beliefs and autodidacticism, reading a list of books, the arrogance of self-made people, Tom Clancy’s ego, the hubris of plaintiff’s attorneys, actors who carry around Faulkner books to prove that they have something else going on, juxtaposing the American dream against violence, how a little bit of information can turn an accountant into a creep, confronting the place where you grow up, and being unmoored from domestic conversations.

Correspondent: Chekhov has this famous rule — or so I have heard — that if you introduce a gun, it should go off near the end of the actual story. And in your book, we have a very intriguing paper shredder contraption that is installed beneath a false bottom in a file cabinet. This leads me to ask you. When you came up with this idea, did you have Chekhov’s rule in mind? But it also leads me to ask you: because when we talked before, you told me that you read the entirety of your manuscript aloud before you submitted it. So how does this fastidiousness and Chekhov’s law apply to an element like the paper shredder? When you have a book such as this one, where you’re exploring character in depth, I’m wondering if there’s a little bit more liberalism in mind when it comes to this extremely tight, one might say perfectionism that has entered into your writing process. So just to start off here, what are your thoughts on these multifarious matters?

Lippman: I’m glad you mentioned Chekhov. Because I actually did have that in mind. Just yesterday, I talked with my sister, who is a bookseller and a very careful, methodical reader. She doesn’t read quickly. So she does read carefully. And she said, “You know at the time I wondered why there was so much detail. But if you’d never come back to it, I never would have thought about it. But when you came back to it, and when I realized why all that detail had been lavished on the furnishings of her office in the particular design of these paper shredders and cabinets.” She said, “I wondered if that was an homage to Chekhov.” And I said, “Yes! Thank you.” Because at the time, she was the first person who had noticed that. When I came up with that, I mentioned it to my husband, who’s a writer, and he said, “I don’t know. It sounds a little James Bond to me.”

Lippman: I said, “No, no, it’s very pragmatic. I’ve really thought a lot about this.” I mean, I’ve said this before. I mentioned it in the book afterwards. One of my heroes was Donald Westlake. And he maintained that if you were very thoughtful about your characters and your situations, you would make it credible — even to people who knew a lot about certain things — if you were true to your characters. If you just sat in your chair and thought hard. Such an old-fashioned idea in writing fiction these days. And so in everything about this book, I sat in my chair and I thought hard. It’s funny to me that, now that the book is out in the world, there’s an emphasis on “Well, Laura Lippman used to be a reporter. So she really knows a lot about the world of sex workers.” I did do research. I did learn some things. I’m by no means an expert on prostitution. I am an expert on the rather peculiar form of prostitution that I created for this book. I sat in my chair. I thought hard about what kind of business this character would create. And that led me to her paper shredders. Even to the detail that they are built by a Polish man who never smiles, but she thinks she sees a wisp of one when he understands the design that she has handed him.

Correspondent: And you point to the fact that there’s a relentless power supply. I think the fact is that you go to such degrees to describe the details of this paper shredder that one becomes willing to accept it, although actually I thought it was a bizarre yet cool idea. Because I had never seen that. Did you encounter any homegrown paper shredder setup like this at all? Ever? Did you ask around?

Lippman: No, but if you have a paper shredder and you read the warnings — especially because a small child had come into my life — I thought a lot about someone’s hand being inserted. Not to give too much away, but I don’t think people would be surprised. It’s not the what of it, but the who of it.

Correspondent: The Temp had a very good paper shredding scene.

Correspondent: There’s that cheeseball movie, The Temp, from the 90s. You remember this? There’s an infamous paper shredder….”Auggghhhh!!!!”

Lippman: I didn’t realize that. But they warn you about your tie.

Lippman: And the average one that most people of us have in our home offices would probably be quite painful but not do real damage. And the idea — it does make sense that she would want a way to, with a turn of the key, be able to wipe out the paper files that she’s been obligated to keep. Just as, now I won’t remember because I do have a poor memory, but I was reading a crime novel recently. And someone said, “Now I’m not going to let you touch the computer. Because I know that there’s a way to wipe out a computer with a few commands. And the computer has now been seized as evidence.” This is a book that’s very much about the hubris of control, of believing one’s self to be in control, of thinking that one can anticipate every single contingency. So it’s very hard for me to think of myself as a perfectionist. Because alongside the other members of my family, alongside my own husband, I am a failed perfectionist. I’m much looser than everyone else I know and consider myself to be quite a mess.

Correspondent: Perfectionism, however, can come from a more relaxed, legato mode, I would argue. I have talked to numerous writers who are extremely concerned about their sentences, but not nearly as concerned about plot. And people have differing levels of what they bring to the table. I think, all writers do. So is this really something to define yourself by as a writer? Is this really something that we should define this novel by?

Lippman: I would actually encourage most writers to abandon perfectionism. It’s obviously impossible. And I think it was Stephen King who said once that the reason you write another novel is because you can’t write a perfect novel. And so the paradox of perfectionism is that, if you’ve achieved your goal, then you would stop being a writer. You have to stop if you could, in fact, produce a perfect novel. And there are some writers in the world who it almost seems as if that happened to them. You see writers who didn’t write again after producing beloved and almost perfect works.

Correspondent: Or who are burdened by the prospect of writing a perfect novel every time. I mean, I’ll name a name so you don’t have to. Ian McEwan. I feel that this has happened to his work. And it’s been disheartening to watch him try to write perfect novels and, because of that, have his voice compromised by these very hyperstylized sentences that get in the way of the life that he has previously been so good at.

Lippman: I mean, I wish I could credit it, because I don’t remember who said it, but it was something I heard at the Theakstons Old Peculier Harrogate Crime Writing Festival. Which is that the book you write is a reaction to the last book you wrote. And so I think coming off a book like The Most Dangerous Thing, which had ten or eleven points of view depending upon how one wants to count it and was deliberately a very slow book — what I had said to myself is “I want to write a fast book. I want to write a pageturner. I want it to be highly entertaining.” And I availed myself of some larger-than-life details and some larger-than-life characters. And I really wanted to have fun. Although then as I got into this book, I could make it fast. I could achieve the pace that I was after. I found that I really could make Heloise’s world fun. And it was my husband who gave me advice, which he almost never does by the way. That’s really rare. And at one point, he said, as I was getting launched into the novel, “Don’t make her benign. Her world’s not benign.” You know, the fact that the women who work for her get health insurance doesn’t erase everything else about prostitution. And it’s not a business that one can be in and thrive in with clean hands. And I thought that was pretty good advice.