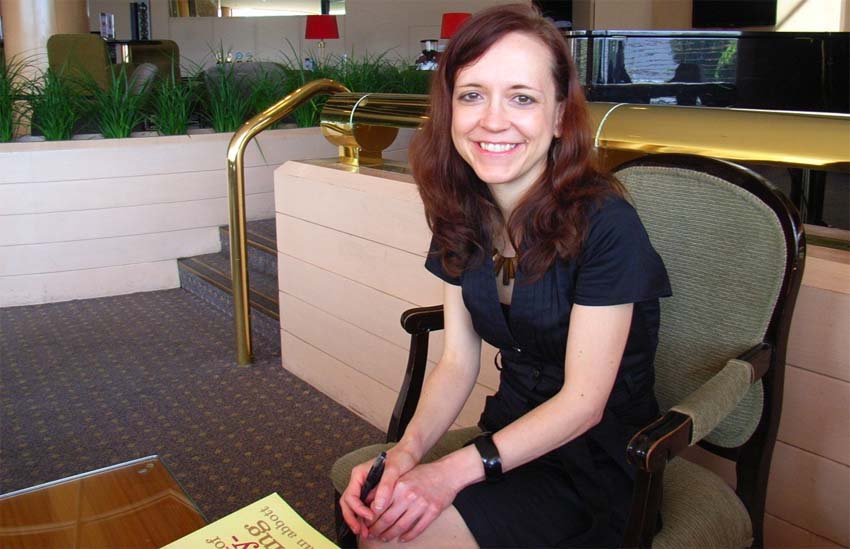 Megan Abbot is most recently the author of Dare Me. She previously appeared on The Bat Segundo Show #404.

This episode of The Bat Segundo Show is brought to you by Audible.com. If you want to listen to Megan Abbott’s Dare Me, and help keep this show going, sign up for a free audiobook and a 30 day trial. Use this handy link: http://www.audiblepodcast.com/bat

Condition of Mr. Segundo: Preparing to shake the appropriate pom-poms.

Subjects Discussed: Secret conversations, how cheerleaders are depicted in American culture, Bring It On, cheerleaders and postmodernism, parallels between cheerleaders and soldiers, doing research almost exclusively online, how fonts and italics reinforced text message culture in Dare Me, the text message as a noir voice, theories that Dare Me started off as a recession novel, teenagers and technology, creating a sad and bleak adult world, logical reasons for why teenagers have no desire to have grown-up jobs, empty apartment buildings, people who die in luxury condos, balancing literary and mystery elements to create a transitional novel, stretching genre, crime as a tool for power relations, using Richard III as a narrative framework, obsession with Shakespeare, the Ian McKellen version of Richard III, Looking for Richard, Richard III as an innocent, the ugliness of ambition, desperation, Deadwood, how political theory and Henry IV and Henry V share much in common, Robert Caro, parallels between mean girl rhetoric and LBJ’s profanity, being afraid of individuals who open their mouths, carryover from The End of Everything of a teenage world as an adult one, Fast Times at Ridgemont High, when parents are irrelevant, what Facebook reveals about teenagers, powerful coaches, how tired men can be manipulated, similarities between Dare Me‘s Coach and Queenpin‘s Gloria Denton, how belief encourages people to commit crimes, true crime, the Aurora shootings, the 1984 San Ysidro McDonald’s massacre, the difficulties of relating to a sociopath, the short story that Dare Me sprang from, writing with a manageable evil, the smartphone as a person, how smartphones plague society (and how much we can resist them), teenagers who aren’t aware of the off button, Facebook trash talk, teenagers who crave for attention, writing about cheerleaders who have no interest in boys, relationships between football players and cheerleaders, cheerleaders as a roving gang, teens excited by the National Guard, smoking and drinking in the classroom, cheerleading coaches who are former cheerleaders, physical brutality, the difficulties of writing physical action, finding a new set of words to describe cheerleaders, using multiple verbs in a sentence, eccentric verbs, how any type of sport creates a new language, contending with copy editors, hockey subculture, The Mighty Ducks, Slap Shot, and tennis espionage.

Correspondent: Now we are sort of doing this secretly. We’ve tried to flag down a waitress to be polite. So it’s very possible we may have to order during this conversation. However, we will talk. Let’s see what we can do.

Correspondent: So let’s start off. I saw that you wrote a New York Times piece about Bring It On. But you use this piece to point out to certain realities of how cheerleaders are depicted in our culture. You point to the portrayal of cheerleaders in two modes: Ironic and Ideal. I’m wondering if some fulfillment of these two criteria is actually necessary to have a plausible narrative these days. What are your thoughts on this? And maybe this is a good way of describing how you zeroed the needle for Dare Me.

Abbott: Right. And I admit. I’m completely vulnerable to both. I love both the Ideal and the Ironic. Every cultural reference I had in there are things I kind of love. You know, Twin Peaks and all the doomed beautiful perfect cheerleaders who become corrupted? I love. And I love all the ironic ones. Some more than others. But it just seems — I mean, the word I didn’t use in the piece, that I avoided using, is “postmodernism.” But that’s essentially what has overtaken the cheerleader. She doesn’t exist as a person and probably never did. So when I actually started to look at actual cheerleaders, the divide fell even greater then in my day in the 1980s, when they were still somewhat enmeshed. Cheerleaders themselves were responding to the idea that they were cheerleaders and they should act as cheerleaders in popular culture did.

Correspondent: Cheerleaders cheerleading about themselves.

Abbott: Exactly! Exactly. But I don’t think that’s true at all today. And I think that “serious” cheerleaders — and I shouldn’t air quote that, but I did. Because they are serious.

Abbott: I think they’d line themselves up much more to gymnasts, to serious athletes. And then that’s the parallel. And I would even take it further. When I look at them, I see them as more closely associated with Marines, boxers, the great risks like pilots ready to go down.

Abbott: Kamikazes. I think that there’s even more interesting aspects to them than being hard-core athletes.

Correspondent: So we should be making World War II movies with cheerleaders in place of the soldiers.

Abbott: Seriously. I actually thought about it writing the piece. Because you know how those old movies, they’d always have the guy from Brooklyn and the Oakie. Etcetera.

Correspondent: The Longest Day with cheerleaders.

Correspondent: We could make a million dollars on that.

Correspondent: Well, the ironic mode, however, I would say that given the fact you have cheerleaders who are purging, who are regurgitating — in fact, one common motif that you repeat, I think three times in the book, is the hair behind the head as they puke into the toilet. To a certain degree, that is ironic in light of the physical robustness of these cheerleaders. Also the lemon tea diets and all that. So I would argue that perhaps you are working in some ironic mode in the sense that you’re taking a very feminine ideal and hardening it up to some degree to that same level that we generally put football players or, as you point out here, military people and so forth.

Abbott: Right. And I think that the eating disorders — the various bad eating habits, let’s say — of the girls has to do more with making weight like wrestlers than with girls wanting to have perfect bodies. And that sort of extremism is what really interested me. But it also became interesting because I was not a cheerleader.

Abbott: No. I couldn’t imagine. (laughs)

Correspondent: But you came in with your pom poms and everything.

Abbott: I know. A skirt on.

Correspondent: You’ve been deceiving me the entire time!

Abbott: I know. Afterward I’ll show you that I…

Correspondent: Oh, I see. I brought my little barrette to twirl.

Abbott: Oh! Good, good, good! I will be dandling. It just strikes me that it’s almost like cheerleaders are a metaphor for being a girl. Because usually they do things girls do. But the cheerleader is the heightened form of it. Girls suffer mightily in high school. They do bad things to themselves and others. They torture each other. There was always this great Seinfeld joke that stuck into my head about how terrible boys are in high school, and Elaine says, “Oh, we never treated each other like that. We would just tease each other until we gave each other eating disorders.” And that always struck me as really true. So that the cheerleader — in my case, I am sort of metaphorizing it or ironizing it in some way. Because it’s a stand-in for how hard it is being a girl.

Correspondent: Well, let’s talk about the research that you did. I know that you have said that you have observed various cheerleaders practice. Was this actually in person? Was this on YouTube?

Abbott: It was all online.

Correspondent: It was all online!

Correspondent: Did you talk to any cheerleaders at all?

Abbott: Via email only.

Abbott: Well, you know, I’m not a journalist, nor do I pretend to be.

Correspondent:> But you play one on TV.

Abbott: I do! Exactly. (laughs) And I guess part of me — I felt, even in my email interviews, that they were performing for me in a way. I wasn’t really seeing them as they were. I would be an intruder. So online, or watching them online or watching them on message boards, where they didn’t know anyone was listening, seemed to be the purest and most authentic view I could get. When they didn’t care. Because they’ll post their practices. They’re performing. So they will always be performers. But I just felt like I was getting a more authentic view of it. And then, at a certain point, I didn’t want to talk to any of them. Because it might change things. My version of it is very heightened. And once I decide how I wanted the world in the book to be, I didn’t want any…

Correspondent: Realism to get in the way.

Abbott: The hyperreality of the book.

Correspondent: So that’s interesting. It seems to me that you were almost collecting textual snippets through these email interviews. Because the book is very heavy on text messages and, in fact, there’s one interesting thing. You have the iPhone font and the italicized font of something from a previous statement. And I’m wondering what this did to get this hyperreal mode that you devised, after soaking yourself so much in cheerleading culture from before.

Abbott: Right. From the beginning, I was so worried about the texting. Because I thought, “How am I going to? Nobody wants to read texts in a novel.”

Correspondent: You can’t pretend to be a cheerleader.

Abbott: No. And there’s nothing more depressing than reading texts. Because they’re so meant for some kind of quick communication. But once I realized it as a mechanism for the way that girls could torture each other, the way that they could be present, when people can be present when they’re not present. You know, there’s a scene where one of the cheerleaders keeps sending texts to the main girl, Addy. So it’s almost like she’s there. But she’s not there. So the text and the snippets became this opportunity to be the voices in the head. Or the classic noir voiceover. Or the voice over the shoulder. The tap on the shoulder. So once I found a way to turn it into something else, I felt that it had become mine somehow.