Michio Kaku is most recently the author of Physics of the Impossible. 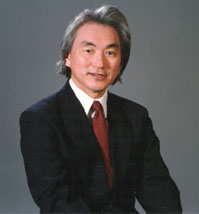 Subjects Discussed: Maximum caps on bandying about theory in physics, relativity and string theory, the Theory of Everything, decoherence and the wave function of the universe, the Large Hadron Collider, detecting sparticles, how journalists are duped by perpetual motion machines, the Alcubierre warp drive, Edward Teller, the hydrogen bomb, military funding for research, invisibility, being asked to prognosticate on when new technologies are available, the slingshot effect, ray guns, phasers, WR104 and the Death Star, neural networks, the Blue Brain Project, Moore’s Law, the deficiencies of quantum computing, functional MRIs, telepathy, and lie detectors.

Kaku: Well, science fiction, I think, plays several roles. First of all, it inspires scientists. Jules Verne’s work inspired Edwin Hubble to become an astronomer — the greatest astronomer of the 20th century — rather than a lawyer. He was in law school when he switched and decided to become an astronomer, because he remembered the thrill as a child of reading Jules Verne. Also, Carl Sagan read Edgar Rice Burroughs’s John Carter of Mars series and dreamed about roaming on the surface of Mars. That’s why Carl Sagan became an astronomer. And second of all, there’s a lot of cross-pollination between the two. Many people think that antimatter was invented by Gene Roddenberry of Star Trek fame. Wrong. Antimatter comes from physics. 1928. The work of Paul Dirac. He predicted the existence of antimatter. Second of all, when you look at warp drive, warp drive had its origins in the work of Albert Einstein. So Gene Roddenberry copied Einstein. But then Alcubierre was watching Star Trek one day and said, “Let’s take this seriously. A warp drive just like the Enterprise.” He put that into Einstein’s equations and out popped out the Alcubierre drive. So here was a question of physics fertilizing Roddenberry, fertilizing physics.

Correspondent: But most people opt to believe in the Roddenberry over the Alcubierre. That’s the question, you know?

Kaku: When I was a kid, my mentor was Edward Teller. He’s the father of the hydrogen bomb. And he even offered me a job building hydrogen bombs.

Correspondent: And you declined that job.

Kaku: I declined that job.

Correspondent: Why did you do that?

Kaku: I’d rather work on something even bigger.