Mimi Weddell is the subject of Hats Off. Jyll Johnstone is the director of the film. The film opens in New York on March 28, 2008. 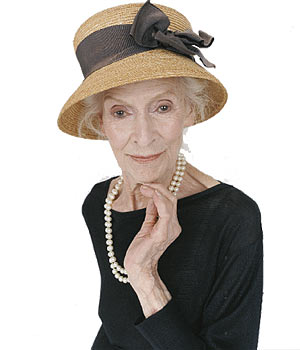 Condition of Mr. Segundo: Under scrutiny from his schizophrenic creator.

Subjects Discussed: Starting the film in Central Park and ending the film in Central Park, a documentary as a self-Rorschach test, dealing with subjects who are used to having a camera in front of them vs. those who are not, eliding moments from the film that were too candid, Mimi Weddell’s relationship with her son Tommy, visiting Elizabeth Arden’s three times a week, marching to one’s own drumbeat, rotundity vs. remaining thin, Jyll Johnstone’s concern for making documentaries involving older people, celebrating our elders, dwelling upon misery vs. “rising above it,” going to an audition right before a funeral service, acting as a physical business, being on TV with a hermaphrodite, unreasonable requests, being afraid of machines, radio, using footage under the fair use provision, Mimi’s hats, smoking vs. profanity, working on multiple documentaries at the same time, and a mystery theater poem.*

Correspondent: Mimi, at one point in the film, you say, “The older you get, the less you dwell on anything miserable that’s happened. If you do, you’re done for.” And yet there’s one moment late in the film in which you cry. In fact, you just described this notion of seeing the film and crying. And on the morning that Dick [Mimi’s husband] dies, you send your daughter Sarah off to Elizabeth Arden’s. And you yourself go off to an audition in California. So maybe this is a question for both of you. To what degree can one dwell upon misery or grief? Or is it a matter of continuing to move forward? Is this film intended to answer the question of just how much one can “rise above it” — so that mantra reads in your apartment, Mimi? What’s the deal here?

Weddell: Well, I was on my way to Dick’s service at St. Thomas. And the place was really filled. It was amazing. He was a very popular man. In any case, Sarah came down in the elevator. And they told me that this call was from California. And it was Michael Ritchie — I think it was Ritchie — who called and said, “Can you audition this afternoon?” And I said, “Sure, I’m on my way to Dick’s service, but I will certainly audition.” What else? I mean, people have been rather astonished that I would do that on the way to Dick’s service. But what else was there for me to do? Just go home and worry about the bills? No.

In any case, I did the audition and they wanted me to come to Texas to shoot the film. I said, “Fine.” And so off I went. To me, it’s not a surprise. It’s just natural.

Johnstone: You have choices in life. You either look forward or look back, have regrets or not have regrets. I think the reason why I’m attracted to Mimi is that she lives in the moment.