Paulo Morelli is the director of City of Men. 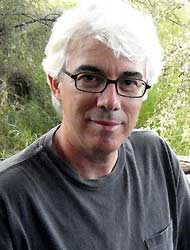 Subjects Discussed: Using close-ups, visual obstructions for sexual activity, violence and emotion, the relationship between City of God and City of Men, possible confusion between the television series and the movie, color schemes, green and night vision goggles, square motifs, the shapes of favelas, MP3s and emerging technologies, the mighty role of soccer in Brazil, Heraldo’s look, making films that don’t reflect the titular landscape, mysterious CD players, not presenting the screenplay to the actors, working-class authenticity, Los Olvidados, cinematic influence, improvisation and continuity, how an act of theft determines identity, dumping bodies into a quarry, and subjective truth vs. dramatic presentation.

Correspondent: How much detail was in the script and how much deal did you bring to it? I know that you and Elena [Soarez] had worked before on the television series. So I’m sure you had some kind of working relationship. And yet there are very conscious decisions on the visuals. And so I’m wondering how much was there in the script and how much you brought with your experience. Like, for example, the CD player that’s sitting there that is a very particular kind of boxy CD player that you’re just not going to see in a middle-class environment. It’s going to be a much smaller tool.

Correspondent: There was no dialogue whatsoever?

Morelli: No, we wrote the dialogue. But they are not supposed to get them by heart. I never showed them the screenplay. The art is for me. I know that this scene is about this, and I need to achieve this and this. And this emotion. And I’m going to that point with the story.