Peter David is most recently the author of Tigerheart. 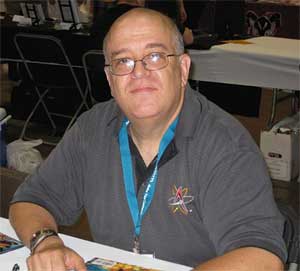 Condition of the Show: Investigating claimed nemeses of Goliath.

Correspondent: I’m wondering though if there has ever been an instance in your comic career, in which an editor has come to you and said, “Hey, Peter, the sales for this particular title are flagging. What can we do to raise things up?” Has this ever an influence?

David: Sure. Of course it’s an influence. I mean, look, when it comes to — particularly my work-for-hire material — my job at the end of the day is to do two things. As far as the publisher is concerned. This is purely my job as far as the publisher is concerned, okay? Number one: Turn in a publishable script. And number two: Do everything that is within my power to write a book that will sell. Okay? Because I could turn in absolutely kickass scripts that aren’t going to sell for crap. But I feel to a certain degree that part of my job is to try and do everything I can to keep the book marketable. I’ve been doing that my entire comic book career. When I was writing Hulk, during my initial twelve-year run, I regularly had access to sales figures ahead of time. Three, four months ahead of time. Because that’s how far ahead we were soliciting. And they were incredibly instructional. Because what would happen is, I would be aware of a sales drop months ahead of time. Months ahead of time. So that I would have the Hulk in a particular incarnation going through a particular series of events. If I saw sales starting to flag, I’d say to myself, “Okay. That incarnation of the Hulk seems to be running its course. Time to come up with something else.”

So if you want to have an idea of when sales were starting to drop during my twelve-year run, at any particular time, look to a point where the Hulk undergoes some kind of transformation, backdate yourself about six months and that’s when I was looking at the sales figures, going, “Okay. We have a drop.” The problem nowadays is that we don’t know sales figures until after the book is already on the stands. So instead of having a three to four month early warning system, so that I can course correct ahead of time, we are always behind the curve by three to four months. Because we don’t know the sales numbers until at least two months after the book has come out. I mean, you know, we see the sales numbers on ICv2 or whatever it is. That’s when I see the sales numbers. We see those sales numbers come out two to three months after the book is on the stands, plus we’re soliciting three months down the line. So you can find yourself in free-fall before you’re aware of the fact that you’ve got any kind of attrition problem. Because every book’s always going to have attrition. Every book. Every book. There’s no stopping it. There’s always going to be. You’re going to get a build. And then it’s going to level off. And then it’s going to start to drop. Always. No matter what the book is. Always. The thing I was able to do on Hulk is, when I saw it start to drop, I would say, “Okay. Time to do something different.” And I could come up with a new angle on The Hulk that would boost sales. Because we’d have people going, “Oh, they’re doing something new and different with The Hulk? Let’s see.” As it is, I can’t course correct. And it’s incredibly frustrating.

Correspondent: But I’m also wondering if some of the stuff that you do with, say, Fallen Angel — I mean, you had a post on your blog recently in which a gentleman couldn’t purchase it from his neighborhood comic store. Because he was the only person purchasing the issue.

Correspondent: So for something like this, is Fallen Angel more of an unfettered territory to write in?

David: It’s unfettered territory. But that doesn’t mean that I don’t want to see sales be brought up.