Sarah Wendell and Candy Tan are most recently the authors of Beyond Heaving Bosoms. They are also the proprietors of Smart Bitches, Trashy Books. 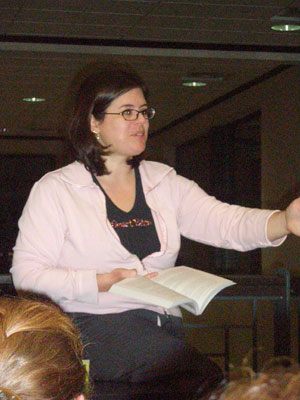 Correspondent: Science fiction, mystery, YA. These genres are getting respect, particularly in the last decade. And yet romance is still one of those things in which people thumb their noses down. Why do you think this is? Must we always have some place to go for the ghetto? What’s the deal here?

Sarah Wendell: Well, I will point out that romance is actually getting a lot more respect because of the turgid strength of its quarterly earnings. And even though most industries — especially in New York, which is hyper-navel gazing in the financial industry — are experiencing massive losses year to year and quarterly to quarterly, romance is the one erect column in your spreadsheet. And it remains quite strong. So while it doesn’t get a lot of respect from your average cocktail crowd, most financial newspapers are having to pay attention to the strength of romance when you’re looking at it as an investment, or as an indicator of an economy. Which is why I think that Harlequin is chuckling, or befuddled, at the entire economic crisis. Because they were founded during the Depression. I’m sure they’re looking at this, going, “This? This is nothing. Are you kidding? Let me just tell you what it was really like.”

Candy Tan: This is great for business!

Candy Tan: What the hell? No, I think personally that a lot of the reason why romance novels are the Rodney Dangerfield of genre fiction is the stigma of effeminacy. You know, science fiction. They’re “novels of ideas.” Mysteries have lots of blood and guts. Well, some of them do. The ones that don’t get respect, interestingly enough, tend to be the cozy mysteries. The ones in which there’s a cat solving the goddam murder or whatever the hell. You know, those are the ones: “Oh man, they’re not worth taking seriously.” If I remember correctly, and I might be wrong, because I don’t know mystery as well as I should, the hardboiled mystery were one of the first to exit the ghetto.

Sarah Wendell: As long as there’s arterial bloodspray, you get some respect.

Candy Tan: Or you know…

Sarah Wendell: Spooge, not so much.

Candy Tan: Yeah, there’s definitely a lot more respect for male fantasies versus female fantasies in fiction and you see this over and over again.

Correspondent: If we’re going to talk about arterial bloodspray, I think we should point to the fallacious anatomical scenario involving hymens, which you point out in this book. 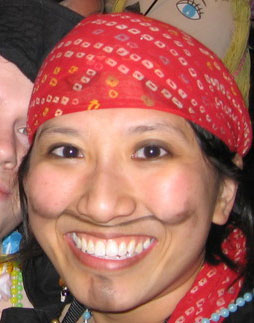 Sarah Wendell: You can tell that this is something that rubbed us the wrong way.

Correspondent: Yes, I got the sense…

Sarah Wendell: And to anyone who’s listening, I want a complete pun count at the end of the podcast. And if we can get an accurate pun number, I’ll totally give away a copy of the book and some beaucoup prize if you can identify how many puns we make in the course of this interview.

Correspondent: But the question is: You have so much attention to detail in historical romance and yet this one thing continues to propagate, continues, I suppose, to not be patched up in quite the way that one would expect.

Correspondent: And so what I’m wondering is: Do you think romance readers and romance writers want to fantasize about where the hymen is?

Sarah Wendell: No, I think it’s simple oral history. And I don’t mean that in a bad way. I think that the legend of the misplaced hymen is just something that’s passed down from writer to writer. Much like the historical inaccuracies that plague other parts of the specific historical genre, “Where the hell your hymen is?” is one of them.

Candy Tan: Here’s the thing. I think I’ve spotted the same misplacement of the hymen in other books. Not romance novels. I think I’ve read a couple of horror novels — and maybe it would have made sense if the girl being devirginized were some kind of filthy alien beast. By hymen, you mean vagina dentata. But you don’t. Oh, oh, it’s infected other genres too! How wonderful! Anatomical craziness all the way around.

Sarah Wendell: And that’s not the only anatomical inaccuracy we’ve discovered. There’s a few one off inaccuracies we’ve discovered that are just mind-boggling. Like there’s one Gaelen Foley where the heroine’s a bona-fide virgin. And I mean bona-fide. Not is she like a virgin, but she’s like a princess or some shit? They haven’t even had sex yet. This is the first time they’re kissing in the woods. And he tastes her milk. Because, you know, virgins spontaneously lactate. Like a postpartum woman going into Target and hearing a baby cry. Yeah, same thing.

Candy Tan: It was the most nipple-tacular moment in all historical romance.