Senator Mike Gravel and Joe Lauria are the co-authors of A Political Odyssey. Gravel was a candidate for the 2008 U.S. presidential race. Lauria is an investigative journalist who writes for The Sunday Times. 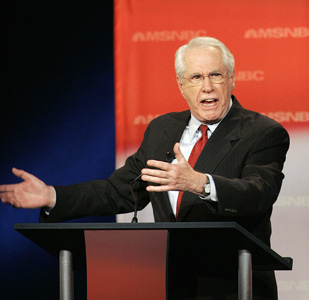 Condition of the Show: Delving into the complexities of the military industrial complex.

Subjects Discussed: Whether Sen. Gravel and Joe Lauria share the same brain, The National Initiative for Democracy, Article VII of the Constitution, rules that prevent people from participating in the electoral process, the military industrial complex, the Civil War and the defense budget, Eisenhower’s transportation system, Harry Truman and Communists, Iran’s missile defense, living in a culture of fear and a culture of information, X-ray machines at airports, Gravel’s involvement in the celebrity culture of politics, “Rock,” involvement with Obama Girl, whether or not Senator Obama or any of the Democratic presidential candidates have been in touch with Gravel since the debates, whether or not Gravel is done with electoral politics, leaving out details of Gravel’s life between 1981-2006 in A Political Odyssey, political visibility, balancing substance and celebrity, the semiotics and audience reaction to “Rock,” the “unnecessary” nature of war, Woodrow Wilson, war as an endless continuum, whether or not Americans deserve the government that currently represents them, Colin Powell and false threats, Daniel Ellsberg, Dick Durbin, Frank Wuterich and Murtha’s defamation suit, the Speech or Debate Clause, morality and collateral damage, Scoop Jackson, Gravel standing up against the ABM, working with hawkish Senators, and political peer pressure.

Correspondent: A question to both of you. The modifier that frequently ripples, so to speak, throughout this book in relation to war is “unnecessary.” You question Woodrow Wilson’s motives for getting us into World War I, writing that America was not threatened. Yet I must bring up the bombing of the Lusitania. And I must also point out that there was the Kingsland Explosion. The Zimmerman telegram. I mean, what is a necessary war? Was America really not at threat in World War I? Is this what you’re saying?

Gravel: Of course it was not.

Lauria: Well, I’ll just say briefly that the idea of the Zimmerman telegram was absolute nonsense. Why did Wilson send ships into the areas where they could be sunk?

Gravel: Right. And there was an argument that it had munitions. I mean, Woodrow Wilson didn’t have to go into the First World War at all. In fact, had he not gone in, there’s a chance that we never would have had the Second World War. Had we let them, that was their war, bleed themselves out. Well, you realize that after the First World War, the democracies of the world were in command of the world. And who screwed up the 20th century but the democracies? Clemenceau and the British and ourselves were the ones that set up the tobacco of the 20th century. Does it get any worse than that?

Gravel: There wouldn’t. Because…

Lauria: You would not have had Hitler.

Correspondent: I thank you for the clarification, but back to the other question. Is war necessary in any sense? Can you cite specific conflicts? Specific battles?

Gravel: I know of no war in history that did not beget more war.

Correspondent: But that kind of dodges the question very skillfully.

Gravel: No, that doesn’t dodge the question. I know of no war that has not begotten more war.

Correspondent: Is it necessary though?

Gravel: I don’t know if it’s necessary. I don’t know if it’s necessary. You attack me. I gotta kill you. Then your brother says, “Well, you killed me.” It’s the famous American cowboy story. You know, vengeance wreaks more vengeance. What kind of question is it? Maybe the question you ought to ask is to take the question from Jesus. Turn the other cheek and maybe you won’t get the other cheek lopped off.