Steve Erickson is most recently the author of Zeroville. He returned to the program for a second conversation with The Bat Segundo Show #447. 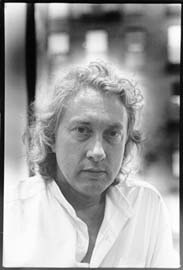 Correspondent: I wanted to ask you about approaching this particular book with less fantastical or abstract elements than your previous books. I’m wondering if it was a way for you to live up to Godard’s maxim — that cinema is essentially truth 24 frames per second.

Erickson: Well, I think that, in the case of this book, because it is a book about the movies, and because I wanted the book to reflect my enthusiasm for the movies, and to reflect to some extent the obsession of the main character for the movies, I wanted to follow the narrative laws of the movies. So I kept it in the present tense. This is a pretty linear book compared to my other books. And it cuts from short scene to short scene, and it never gets too internalized. Things are told in the externals of dialogue and action. So because of all of that, I think it had the effect of grounding the book in a way that the other books may not have felt as grounded. And also, it was fixed in a very particular period of time, which is to say the 1970s in Los Angeles, when a lot of things about movies were changing.