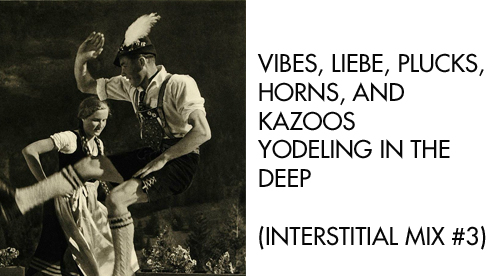 This is the third of an unspecified series of interstitial mixes that I’m serving up as I remain busy at work on numerous fronts.

This mix began as I became more curious about German culture and linguistics, undoubtedly ushered in by the many puns in Finnegans Wake. Then I heard mariachi players and virtuoso guitarists and felt compelled to offer a slightly mellower counterpart to the two previous mixes to match the changing seasons here in New York. But there are some quite strange selections here involving horns, kazoos, and yodeling. Enjoy!