Will Leitch is most recently the author of God Save the Fan. 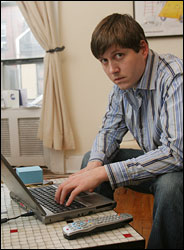 Condition of Mr. Segundo: Running away from the spirit of Red Smith.

Leitch: A lot of people worry about sports blogs going corporate, or like Yahoo hiring sports bloggers full-time. I never worry about a lack of independent sports bloggers. As long as someone has a voice and they have something they have to say, they’ll go ahead and do it. Whether someone’s paying them or not. The nice thing about it is that the good ones — the best thing I’ve learned about sports blogs since doing the site is that the ones who are good get readership. Like there is a meritocracy to it. It’s actually pretty exciting to watch.

Correspondent: But I’m wondering if you can actually maintain this meritocracy with Deadspin, because I know that Deadspin is run by Gawker Media.

Correspondent: And you are beholden to pageviews. I mean, unless you’ve got some sort of separate deal going on with Denton. I don’t know.

Leitch: Uh, I have the advantage of not — I don’t personally get paid like the new pageview system they have. I’m the editor of the site. So I don’t have to worry about that. That’s actually more for the writers.

Correspondent: But your contributors have to worry about this.

Leitch: I suppose. But like frankly it’s nice. Because nobody really notices. Like the nice thing about working with Gawker is that they literally have no idea what I do on Deadspin. In a way, I’m a little bit of a hark back to an earlier time of Gawker Media. Back when it was — like the idea was, “Let’s take this established thing, whether it’s politics or Hollywood or sports, and let’s put a new spin on it.” And I think Gawker’s changed a lot. It’s amazing. I’ve been at Gawker now for almost three years. And I’m the second longest editorial employee. Which to me, my father has worked the same job for thirty years. He thinks it’s crazy. But out here, it’s like, “Wow. You ran a blog for three years. That’s amazing.”

Correspondent: Yeah, that is thirty years.