Terry Sanders is most recently the director of Fighting for Life, which opens in New York and Los Angeles on March 7th. 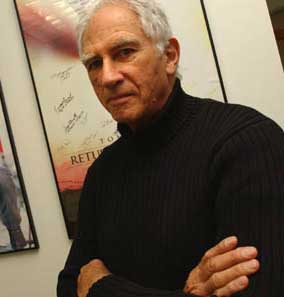 Condition of Mr. Segundo: Convinced that he is fighting for his life.

Subjects Discussed: Maintaining an apolitical tone, whether being a military doctor involves politics, apolitical semiotics, how much reality offers to a documentary filmmaker, military reenactments in Antietam, capturing the historical trajectory of military doctors, Errol Morris, conducting interviews close to the camera, the decision to feature an American soldier determined to live while including an Iraqi captain who doesn’t want to live after being paralyzed, remaining open to symbols, Crystal Davis and Tigger, depicting military medical students from an everyman’s perspective, the economics of caring for the wounded, uninsured health care, splitting the narrative focus between the doctors and the wounded, hospital organizational systems, medical school field exercises, training for mass casualties, whether or not schools can truly prepare medical doctors for the realities of war, obtaining cooperation from the military, getting consent from soldiers to film, and subjective vs. objective documentaries.

Correspondent: You mentioned Errol Morris earlier. And this is interesting to me because there’s one moment where you have Crystal’s father staring directly into the camera and I kept thinking to myself, “Oh, is he doing that Errol Morris situation in which Morris projects his image of his face right where the camera is?” And it’s only in that particular instance. And I wanted to ask you about that.

Sanders: Actually, no, I would not — I mean, it’s interesting what Errol Morris uses and he certainly uses it well. It seems to me a contraption that would take time to set up and maybe produce some self-consciousness, maybe, in the person. I try to minimize the equipment as much as possible. And in fact, Crystal’s father is not looking directly into the lens. Because I actually instruct people, “Look at me. Don’t look at the lens.” Because looking into a piece of glass immediately breaks the connection between the human connection.

Correspondent: I guess you must have been sitting really close to the camera. Because his eyeline was…

Sanders: I was. I always sit very, very — technically, I mean over the years, my technique is — I want it to seem like they are looking into the camera. But in fact, they’re probably looking at my right eye, which is right next to the lens of the camera.

Correspondent: How close do you sit to the camera? I’m curious. Are you within inches?

Sanders: Within a half inch.