Andrea Peyser is most recently the author of Celebutards. 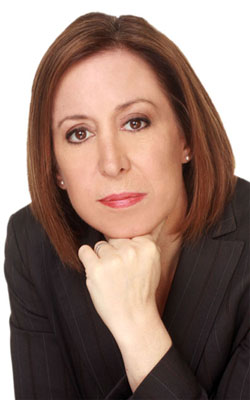 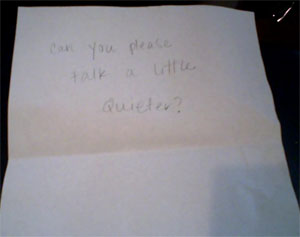 [PROGRAM NOTE: At the 22 minute mark, while the conversation concerned itself with the dangers of generalization, a woman, who was sitting at a table located a good seventy-five feet away from them, gave Ms. Peyser and Our Young, Roving Correspondent a note. The note read: CAN YOU PLEASE TALK A LITTLE QUIETER? Now it should be observed that, while the conversation was animated, the two talkers did keep their volume level to a reasonable decibel level. Indeed, many folks sitting adjacently to these two appeared to be interested in the conversation. (This has been known to happen from time to time, since these conversations are recorded in public places. Indeed, there are a few amicable people working at one Midtown cafe who have urged Our Correspondent to come back because these conversations are apparently quite odd and intriguing to them. It also helps that we tip well.) It should also be noted that the woman with the note had congregated with a group of peers for a discussion that deployed such strange terms as “synergy,” “collaboration,” and “market forces,” and that this group talked at a level far exceeded all other conversations occurring in the cafe. We note all this for several reasons: (a) to explain to the listener yet another odd and unusual moment in the history of this program, (b) to point to the problematic lack of distinction between workplace and social gathering point in our present epoch, and (c) to demonstrate that strange forms of passive-aggressive behavior remain troublesomely alive and well.]

Subjects Discussed: Why celebrities cannot be ignored, “anti-American” sentiment, Sean Penn’s trips to other countries, whether or not Alec Baldwin is entitled to privacy, photographers and paparazzi, the limits of the media, whether hypocrisy is a valid description of celebrity, First Amendment rights, Martin Sheen’s 9/11 remarks, being invited to be honorary mayor, rudimentary viewpoints and free thinking, Nancy Pelosi’s importance, whether it’s possible for Peyser to agree with Al Sharpton, Munich and Black September, the problems of holding an artist’s statement on the same level as the art, Steven Spielberg’s remarks about Israel, the problems with generalizing about Mumia Abu-Jamal’s followers, being friends with Rosie O’Donnell and O’Donnell’s betrayal, on not taking the high road, celebrities of virtue, Bruce Springsteen, old Hollywood vs. the present publicity machine, on being vituperative in the New York Post column, quibbling with the infamous Heath Ledger column, “knowing” the celebrity from a snippet view, whether or not Peyser is happy, giving into the readership, and a few positive things that Peyser can say about the entertainment industry.

Correspondent: You deem Alec Baldwin a celebutard partly because of the infamous voicemail to his daughter. But I’m wondering if it really is fair, given what you’ve just discussed in relation with Sean Penn and his political sentiments, to take something that was never intended for the public and put it up there with something that is actually in the public record. I mean, is it really fair to deem someone a celebutard for their private actions like this?

Peyser: Well, private actions. He left a voicemail. Any idiot knows that anything you say on a cell phone, anything you email and voicemail, it’s out there. He was in the middle of a custody battle. He was threatening his daughter. To come over to California and straighten you out. It got into the public eye and he got furious because of that too. He blamed others for his own actions. That’s also a common thread in celebutardism. When Barbra Streisand, for example, is caught being really, really stupid, she blames other people for her own stupidity. So in the case of Alec Baldwin, he did something really stupid — actually dangerous — and he blamed someone else.

Correspondent: But if it were not Alec Baldwin, someone could leave that voicemail and it may not have been disseminated out into the media like this. Just as, for example, you mention George Clooney and his anger and fury towards a photographer shooting a picture of him above the men’s stall. You’re saying to me that if a photographer came up to you while you were doing your business that you wouldn’t have any particular problem with that?

Correspondent: It’s out there to be disseminated?

Peyser: I wish George Clooney would make up his mind. One day, he’s fighting against the stalerkazzi, as he’s called them. As other celebrities have called them. People who stalked Princess Diana. Of course, the courts found that she was killed not because of the paparazzi, but because of her drunk driver. But anyway, he made a very big deal about that. People could be seeing it as censorship. Whatever. But then he turned around and he decided that I am going to back off. And that is censorship. And it’s okay. Say whatever you want about me. So I wish he’d make up his mind really.

Correspondent: Well, he is expressing understandable anger at a photographer shooting a picture of him above the stall. If someone did that to me, I would probably also be quite upset. I’m sure you would too.

Correspondent: I’m wondering if it’s fair to hold him accountable for that particular understandable reaction and use this in the broader painting of who he is in relation to all of his other actions.

Peyser: Well, that was in Australia, first of all. He’s giving a picture of the media. The media. I love that word. I’m not shooting George Clooney naked. I really don’t care. But that was in Australia. He got the thing suppressed. He threatened a lawsuit. And I wish he’d now be quiet. And now he’s decided that the media has to be left alone. Which one is it? Are they killing Princess Diana? Or are they okay? Which one is it?

Correspondent: But do you believe that a celebrity is entitled to some level of privacy? Is it really fair to constantly — I mean, you’re living a life as a celebrity. You’re having all these photographers, reporters, paparazzi, you name it, invade your particular personal space. So understandably, your particular lines in interviews and the like are going to be subject to more scrutiny. And so this makes me wonder whether it’s actually fair to attack them.

Peyser: What I really love is how somebody — like, take Madonna, for example. Way back when, she was creating things that would attract media attention. She was desperate for media attention. And now that she’s a huge star, she’s the most controlling person who exists as far as interviews go. So why can they run to me and say, “Please, pay attention. Pay attention.” They do everything including taking their clothes off in public to get us to write about them. To take their pictures. And then when they reach a point of fame and fortune, it no longer exists. I don’t know. Actually, I would say that the media is dreadfully controlled by celebrities. I don’t think it’s as much of a free-for-all as you’re suggesting. I think there are armies of publicists out there who really control the image.

Correspondent: I certainly agree with you about that. You make many interesting points about Tom Cruise and Michael Moore certainly.

Correspondent: I would never interview them because of these particular controls. But nonetheless, look at what happened with the Christian Bale outburst. This was remixed in a very fun way on YouTube. And suddenly things did get out. But the question is whether it’s entirely fair. I mean, I understand what you’re saying. Which is that the media — one needs it to advance in one’s career. But simultaneously, is there a particular point when the media should back off? Should they be probing and taking pictures of children and the like? And that sort of thing?

Peyser: Well, you know, personally, I have never done that. I don’t go after somebody’s children. Not without permission. But you know, I don’t know. Michael Jackson goes out in public with his children in veils. I would say that he’s attracting more attention to them then if he had just gone out in public with children with their faces showing. But I don’t personally condone using children. But I think that a lot of celebrities put them out there. Put them out there to attract attention.

Correspondent: Even if they’re doing their shopping, for example. And the children happen to be along. And then the paparazzi come. I mean, see, this is where we get into — I’m trying to just clarify where you’re coming from here.

Peyser: See, once again, this is a very small thing. I make the point. And I do this in the cases where the celebrity is obnoxious in the control. Of pointing out that at one point in their career, when they were very young, they would do anything for attention. Now I have never stalked anyone. Everything I get is from above-board sources. So I’m not speaking for myself. I’m talking about the hypocrites. The celebrities who use the media and then have no use for it once they’re famous and rich.