Brad and John Hennegan are the filmmakers behind First Saturday in May, which opens in theaters on April 17, 2008. 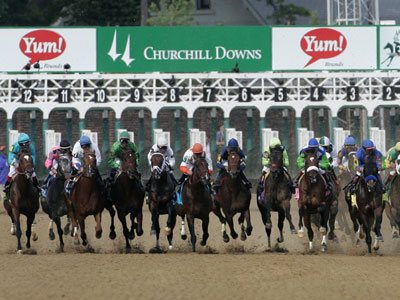 Condition of the Show: Racing to the finish line.

Subjects Discussed: Why the Hennegans chose six horse trainers, cutting the film down from a three hour epic, Pop-Up Video-style captions, the seven mysterious trainers who didn’t make it into the film, the problems of knowing that Barbaro was going to win the Kentucky Derby, tracking a story after a victory, focusing upon the media, frightening reporters who hold both a cup of coffee and a reporter’s pad in one hand, not using a voiceover, footage that begins with a question, laying down the rules, juxtaposing the God’s eye view of NBC footage with ground-level footage, giving cameras to children, why the trainers were not photographed in their homes, getting away from the track, whether or not Dale Romans is humorless, Frank Amonte’s effusiveness, trainers who feel the need to look good in front of the camera, the lack of gambling portrayed in the film, the Kentucky Derby elite, previous film experience, kayak.com, and cheap travel.

Correspondent: Going back to this notion of family, we see many kids essentially speak in lieu of the trainers. I thought that that was an interesting choice on your part. Because I’m watching this, going, wow, these folks are really trying to keep up a presence. They must actually look good in light of this particular Derby crowd. And then on top of that, they have this whole family image. I think of — I’m forgetting. It’s the Arkansas trainer Holthus.

Correspondent: Bob Holthus, who has his wife wearing this garish, white outfit. This genteel kind of appearance. And this was striking to me, because it seemed very much that image was even more important in some cases than the actual training. And then you have this juxtaposed by Frank [Amonte], who is very much a naturalistic person. Who is openly affectionate with his family in contrast to the other people. How much was look a part of this documentary? You have to keep the image in order to…

John Hennegan: No, no, no. I mean, Bonnie’s a woman, like a lot of women we know, that just likes to look good. She’s got a hundred hats.

Brad Hennegan: She calls it her costumes.

John Hennegan: Right. She likes to go to the racetrack and dress up. If you saw Bob, her husband, Bob probably wears a variation of the same thing everyday. To someone like Bonnie, the racetrack’s a celebration of her. And she wants to look good. Etcetera.

Brad Hennegan: Bonnie’s also a hell of a handicapper by the way. She’s a great handicapper. But, you know, it’s just like any business. There’s some people that are slick. Slick talking businessmen. There are others who aren’t. You can compare it to any business where some feel that the exterior is very important, where others don’t.