Chimamanda Adichie is most recently the author of Half of a Yellow Sun. 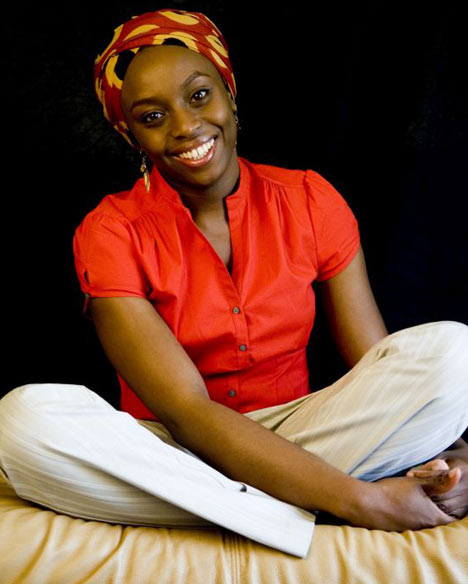 Condition of Mr. Segundo: Finding uses for his Kleenex supply.

Subjects Discussed: Young novelists and ambitious war novels, horrible Nigerian critics, the novel as the ideal prism for the Biafra conflict, A Woman in Berlin, the advantages of small details, J.G. Ballard, twins, the advantages of narrative dichotomies, adultery and monogamy, relationship fidelity vs. national fidelity, sensuality, specific sexual positions, serial adultery, the skin metaphor, jumping around in time periods, High Life music, the faults of education as a revolutionary galvanizing point, the ethical vacillation of Ugwu, whether sparse details convey the complexities of war, Toni Morrison’s reluctance to write about sex in detail, the advantages of teaching writing classes, names, whether Half of a Yellow Sun is a political book, an unexpected digression concerning Ms. Adichie’s cell phone, and sermonizing in fiction.

Correspondent: I wanted to actually talk about the violence in this book. You describe if often very sparsely. The bodies are decapitated. The people are massacred through brutal racism. But you don’t dwell on really elaborate detail of these particular — of this violence. And even Ugwu’s finale — near the end, I mean, his choice at that bar, it’s only like a half page of ethical vacillation. So I wanted to kind of ask you about that. Do you feel that stopping short sometimes really conveys the complexities of war? Was this an issue for you? Or is this more about the narrative than it is about depicting war?

Adichie: I think it’s about both. I do think that, in much the same way that details work better when you’re writing about something huge. I also feel that if you’re writing about something difficult, violent, that less is more. You know? And that sometimes you run the risk of having it become pornographic. I didn’t see myself — I didn’t want to, quite frankly, describe those bodies over and over. I sometimes feel that one tiny detail is enough. I remember reading something about Toni Morrison, where she said, for her, sex scenes were — she tells the reader, a man is on top, the woman is underneath, and she leaves it there, you know. And I remember reading that and thinking — and she lets the reader and she thinks that’s enough. All you need to know is who’s on top and then you make up the rest. I don’t share that when it comes to sexuality. I sort of want to tell you what happens. But when it comes to violence, I think I do. You know, I want to give you a tiny detail and then — I just don’t want it to get…I think that it’s very easy to go overboard with violence and it makes me uncomfortable. And I think that it also might have something to do with the fact that I was always aware that I was writing about something that really did happen to people. And there’s a kind of — I don’t know if it’s respect. Maybe it’s community that I wanted to bring to those scenes of violence.

Correspondent: I can totally see what you’re saying, but doesn’t this kind of get in the way of pursuing the truth further and really getting at this…?

Adichie: No, I don’t think so. I actually think that sometimes it might make it closer to the truth.