Stephen Graham Jones is most recently the author of Demon Theory. 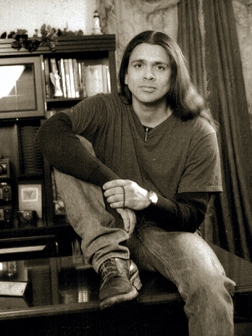 Condition of Mr. Segundo: Not sacrificing time for horror.

Jones: I just discovered that footnote function in my Microsoft Word, I guess. And I was writing Demon Theory and having a ball with the screenplay terminology and all that. But then maybe, I guess fifteen pages into it, if that, I started dropping footnotes. They were meant to be deleted later. I was dropping them. Like I was calling myself names. Like “You obviously stole this from Halloween.” “You stole this from here.” You know. But then they just kept snowballing and snowballing until everything was stolen from something. And that kind of just became one of Demon Theory‘s conceits, I guess.