Charles Bock is the author of Beautiful Children. 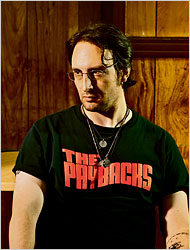 Condition of Mr. Segundo: Reconsidering the last eleven years of his life.

Subjects Discussed: Setting a novel in Vegas, writing about a city when living there vs. a more distant approach to learning about the location, Las Vegas and its suburbs as the fastest growing cities in America, plotting and linear storytelling, writing out of time, authors who break down barriers, staying with an idea and coming up with a “closer mess,” trying to live up to ambitious authors, limiting dating to two nights a week to write a book, characters with goals they can’t reach, disappearing children vs. those who run away, Cary Sayegh, embedding mashups of kids who ran away in Beautiful Children, on not wanting to appropriate real-life stories, downplaying the life-affirming nature of runaway stories, stand-up comedy, living in fear of having a novel in a half-finished drawer, working crappy jobs, working at a celebrity tabloid, the feeling of “building a bomb in my basement,” Axl Rose, Chinese Democracy, involvement with the text as “delicious torture,” coming up with a promotional website without getting music rights, and why Bock feels that too much attention is being paid to comics.

Bock: I had an idea in my head of someone who’s unhappy in their skin and they can’t escape, they have to escape their surroundings. Then I learned all these stories. I modified them towards what I wanted to do. I was just in New Orleans. And there’s a troop of homeless kids. And some of them, they all play instruments. Of violins, accordions, and whatever. And different members teach new members the songs so that then they can do street performances. That to me is an amazing, wonderful, life-affirming, great thing. I don’t know that that would have been — I would have had to twist that for my book and somehow make it not as life-affirming. But I had something in my head. And I had to match it.