Eran Kolirin is the writer and director of The Band’s Visit, now playing in theaters. 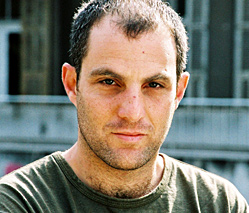 Condition of Mr. Segundo: Contending with the inflexible language demands of the Academy.

Subjects Discussed: Using a great deal of static shots, Antonioni, the influence of comic books, creating a cinematic fable, contending with too many extras in a shot, the story behind the film’s most striking long take, working within a fixed frame, how sound conveys the feel of a location more effectively than visuals, the technical aspects of topography, the relationship between political and personal choice, approaching a girl with the pickup line “Do you like Chet Baker?,” ice skating rinks in Israel, police orchestras, the curves of the hats, epaulets, designing the band’s costumes, and the visual use of mirrors and identity crisis.

Correspondent: But I wanted to also ask about the most striking shot, I think. The moment where you have the three figures, of course. You have the ladies’ man essentially suggesting to Papi, who claims that there’s sea in his ears and who is just completely incompetent when it comes to women. And you essentially have over the course of this shot — which never moves, this three minute shot, maybe four minutes — where he’s basically instructing him on what to do. You know, he takes a flask of alcohol out. This is very much something that is essentially stripped down to its basic elements. And I’m curious about this. Was this really the only way to depict this particular area…?

Kolirin: No, you see, a lot of things, they evolve over the course. To begin with, we had the more complex shooting for this scene. I had several shots to break this thing down. And I knew that it was a very important scene in the movie and had to get this scene. But we started shooting it. And we do one take. And we didn’t have a lot of material. We ran out of film stock. And I look at my photographer Shai [Goldman] and he looks at me. And we say, “Let’s be sure to have this one shot work.” Because we don’t have the time, not the money, to have the other shots. So we have this. And this shot should work. So let’s now concentrate on only this shot. So we kick out all the rest of the alternative shots. We stay with that shot. You know, it’s also one of those things that you know when you shoot them, you have to make it one take. Because otherwise you’ll cut it along the way.