Adam Langer is most recently the author of Ellington Boulevard. 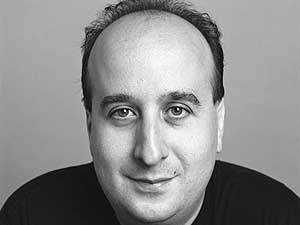 Condition of Mr. Segundo: Scurrying away from Duke-loving hipsters.

Subjects Discussed: Topographical narrative, characters that emerge from the environment, being a “method writer,” dialogue and perspective, the use of quotation marks, writing from the perspective of animals, dog science and memory, coincidences and multiple types of characters, older men and younger women, classical music, the history of clarinets, people who come to New York to find themselves, Langer’s experience as a theater critic, writing in the moment, the difficulties of trying to capture an ever-changing neighborhood in a book, pretentious actors, Old World vernacular, The Emperor’s Children, the sense of entitlement in relation to the New York novel, Robert Indiana’s LOVE sculpture, “A Novel in A Flat,” musical keys and sounds, similarities between character names and media names, using “sontag” as a noun, filtering a cultural obsession, sense of entitlement, Tarkovsky, solipsistic characters, Candide as a one-man show, stylish haircuts, indecisive people who avoid being pro-active, dissertations with bad titles, on not getting it, the disparity between calculating prices and getting lost in pop culture, imposition of ideology on other characters, working with Eli Wallach, and people vs. buildings.

Correspondent: I was also curious about The American Standard. Was this based off of…?

Correspondent: Just as Nick Renfeld reminded me very much of Nick Denton. That…

Langer: Oh no! No, no, no, no, no, no, no. I actually know a couple of people who used to work for Gawker. But I think I was — unfortunately, I’m a little slow, out of the loop, on things. I don’t think I knew who Nick Denton was until a year and a half ago.

Langer: Well, Renfield also eats cockroaches in Dracula and I wasn’t thinking of that either.

Langer: Chloe the publisher of the magazine?

Correspondent: Yes, exactly. Was there a specific media figure you had in mind for her?

Correspondent: Or are you just being very careful with your answers? (laughs)

Langer: No! No! I’m not. Not at all. I just don’t — I don’t want to do that roman a clef thing, where you’re making fun of a particular. Because I think that that makes it very tied to a particular moment and a little bit shallow. No, it’s not. I don’t know. Who? Tina Brown? She doesn’t have a magazine now. I wasn’t thinking about any particular individual. I was trying to create a character.