Javier Calvo is the author of Wonderful World. Mara Faye Lethem is the translator. 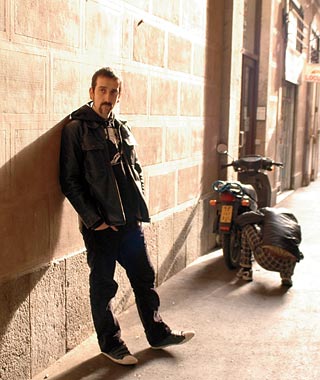 Subjects Discussed: The pleasures and challenges of having an in-house translator, Pandora in the Congo, the paucity of foreign writers published in America, the frequent use of “nambly-pambly,” whether or not the translator has the final word, emphasis on large asses, people sprawled out in chairs, recurring motifs, brands of men’s suits, Charles Dickens, writing a more traditional novel compared to earlier, more post-modern efforts, pompous language to comic effect, phrase repetition, constant concern for green eye-coverings, sticking close to author’s original syntax and grammar, breaking up convoluted sentences, differences between inner rhythms of Spanish and English, translating David Foster Wallace, why Calvo doesn’t translate his own work, “being native” in original language, resemblances to Tom Wolfe’s A Man in Full, false comparisons to graphic novels and Quentin Tarantino, roots in 19th century fiction, on reading books within a particular genre while translating, staying faithful to text, trap of feeling translator knows more than the author, searching for the perfect word, averting the “potential nightmare” of having a wife as translator with professional distance, masculinity issues, the penis as a character, pathological approaches to sexuality, assigning specific set of problems to characters, excerpts of a fictitious Stephen King novel, parallel metafiction, the Fantastic Four, Louis Armstrong, on being asked if the title is ironic, comedy and optimism, compromises needed to reach an American audience, Pink Floyd, particular football/soccer references, Spanish vs. Latin American vocabulary, adding clauses to explain things, why footnotes are horrible, Donald Duck, character cruelty, fossils and ruins of 1940s jokes, 24, the world one-upping fiction, risk in losing subtlety, the Sung Society, references to stealing art and how it reflects the world, recreating Spanish translations of Stephen King novels, series of paintings based on the Book of Revelation, hermeticism and magic, replicating agoraphobia and photophobia, quest for absent fathers, anti-Christ-like gestures.

Correspondent: I must ask then, Mara Faye, if you had read any other books to get the idiom right in English for this. Because both your translation of this book [Wonderful World] and your translation of Pandora in the Congo strike me as far more specific. It’s almost as if the translation itself can be placed within a neat, genre-specific feel in the prose. And I’m curious if you do it more intuitively or if you actually do, in fact, try and read books surrounding a particular genre or a particular place it might end up. So that it might be more palatable to the English ear.

Lethem: No, I don’t do that. I don’t think that that would be fair to the author. I work with the text. And much more so than the author. Even if he’s in the room next door. Because there are two very separate things. The voice I try to pull from the text itself, not from any other text. Obviously, if the author is working with references — as in Pandora in the Congo, with adventure stories and things like that — it should come through in the original. And so I really try to be as faithful to that as I can. I think a mistake in translation can involve feeling that you know more than the author. It’s like a trap. You think, “Oh, I know what he’s trying to say here.” But you sometimes have to be able to say, “Okay, I can make this choice for him.” Because there’s choices to be made. Definitely. Sometimes, there’s the perfect word. And sometimes there isn’t. You know, there’s no one word that means that in English. But I try to avoid anticipating the author.

Correspondent: But in this case, what did you do to insulate yourself? Because the author here is in the next room. Did you essentially communicate as minimally or as little as possible with Javier? Or what happened here?

Lethem: Often about what we’re going to have for lunch. Or who’s going to pick up our daughter from school.

Calvo: I think that the situation where your wife is your translator and you’re living under the same roof — or your husband is the author you’re translating — is a potential nightmare. So it was good that she didn’t really come to me that much or I wasn’t bothering her. And we had some space between us. It’s very easy too to create a professional distance in a question like that. But yeah, it was very good that we didn’t try and work together. And she only came to me when she had an important question or something like that. Because imagine. I think translating your husband’s work might be a pretty good cause for divorce. Potentially.