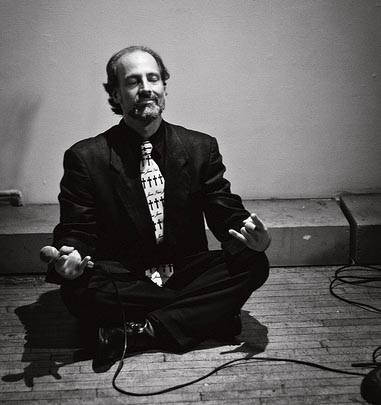 Jesús Ángel García appeared on The Bat Segundo Show #406. He is most recently the author of badbadbad.

Condition of Mr. Segundo: Hoping not to confuse his relationship pursuits with his research ones.

Subjects Discussed: Whether Mr. Garcia has a real name and a criminal record, deflecting charges of narcissism and wish fulfillment, unreliable orgasmic narration, flings and sex parties, the furry culture, whether badbadbad is a misleading title, Hubert Selby, the reader’s judgment, the problems with nonjudgmental sex, the openness of metropolitan cities, Irvine Welsh’s Filth, de Sade, whether Mary Gaitskill’s fiction is erotic, presenting a protagonist with moral challenges, the movie Superbad, writing loving fisting scenes, the grandfatherly nature of slideshow presentations, Jeanette Winterson, people who tweet your appearance at a party, anti-human technology as a form of pornography, chat sessions in novels, inventing a fictitious online service for a novel, JPEG commentary, the creation of non-existent technology, satire vs. a point of reflection, people who feel more satisfaction taking photos at an event rather than attending an event, Susan Sontag’s “Regarding the Torture of Others,”, branches of Christianity, restaurants that insist they have the “world’s greatest ________,” Garcia’s Catholic background, Kyle Minor, preachers-turned-artists, all-purpose denominations, Bob Jones University, interviewing people on OKCupid, the interactivity of sexuality, Erskine Caldwell’s Tobacco Road, contending with readers who desire certain resolutions, changing scenes based on people’s reactions, competing with rapid changes in technology, the skeezee feel of now, using the tech language, atavistic versions of the Internet, convincing a church to be a webmaster, whether or not touring for two months straight sells books, tour blog entries at Electric Literature, Kevin Smokler impressions, 50/50 deals with publishers, Kindle deals, special editions with condoms, performance vacations, the “hurry up and wait” nature of the publishing industry, authors who put out a new book every year, Blake Butler, Richard Powers, socializing and stamina, finding authentic connections in a culture that you criticize, stealing babies as a form of author promotion, responding to reviews with death metal, and people who show up at readings who aren’t interested in buying books.

Correspondent: The question I have, first and foremost, is: Is Jesús — is that your real name?

Garcia: Well, I don’t know if I’m allowed to answer that.

Correspondent: Is Green a surname that you have gone by? Do you have a criminal record? What’s the deal here?

Correspondent: Yes. Well, some might call this — a reader who doesn’t know you might suggest that this is narcissism or wish fulfillment. Because this JAG in the novel has lots of sex.

Garcia: Does he really though?

Correspondent: Well, he certainly gets lucky. In some sense.

Garcia: (laughs) Does he get lucky?

Correspondent: Unreliable orgasmic narration. Meaning that all of the times that he blows, he’s not necessarily blowing. Is that what you’re suggesting?

Garcia: Well, you know, I think if you go through it and you track the sex after his relationship with the Shannon fling — which I think is kind of a romantic thing — after that, he doesn’t really get fulfilled. His job is to service women.

Garcia: And he does that in a selfless way. But the question is always at what cost to himself? And if you actually look at it — if you’re talking about, if certain amount of gratification comes from, you know, sexual connection, I don’t think he has much connection after the Shannon character. So I wouldn’t say he’s getting lucky. I would say he’s…he’s…uh….

Correspondent: He hasn’t actually altered his existence in order to enjoy these superficial moments.

Garcia: Yeah, yeah, yeah. I think he’s way more — I’m not sure. I just don’t think that he’s got satisfaction there. Whereas myself, personally in the relationships that I’ve had in my life, I’m not like him. Because I’ve actually had a lot of long-term relationships. And usually they’re much more about intimacy than kind of fling stuff. However, I did do some research to prepare for this book after I had…

Correspondent: Yeah. I was going to ask. Did you sleep with anybody?

Garcia: I had recently…

Garcia: I was in love. I was in a long-term relationship. Eight years or so. It ended. I was single, basically for the first time since like freshman year in high school, with the exception of a dry spell in sophomore year. I had a lot of back-to-back monogamous relationships.

Garcia: Relatively monogamous relationships. And then I was single. And then I was like, “Oh wow.” So I dated. And I never even used that term before. I started dating. And I was doing these online social network dating sites. And I was just trying to be super-open to what anybody was interested in. Just to kind of see what would come back and what kind of situations I would get into with me.

Garcia: Or stuff I’d read or things people told me.

Garcia: And they were dressed up. And it was the first time I’d kind of experienced this in person. I was like, “Oh. What’s this? This is really unusual.” And there was this girl there — or woman there — and all these guys were like kind of foaming on her and touching her and caressing her. And all this stuff. And it wasn’t an orgy, per se. But it was like this — and there were two of them. Two of these women. And it was like this kind of female worship thing. It was pretty fascinating. And it was also around this role-play furry culture that was there. So that was very unusual. But that’s not really my thing personally. And neither is it JAG’s thing. JAG’s thing is not mine personally, though it does come out of definitely some past ideas of this idea of like wanting to — wanting to, you know, be with individuals. Wanting to be there for people who need you to be there. But then what does that do for you if you’re not getting any reciprocation?

Garcia: And then you know…

Correspondent: This may explain — I mean, I was I must confess that I was a little disappointed.

Correspondent: JAG starts off as this…

Garcia: That’s because you’re a pervert.

Correspondent: No, no, no. I am a pervert. And I have gone to sex parties in a previous life. But JAG — he starts off being this sort of working-class kind of guy. And he is willing to go to just about any strange thing at the very beginning. Or so it seems. And so I’m thinking, “Oh wow. This guy’s going to be really intense.” And then he becomes Mr. Nice Guy. And I was like, “Well, wait a minute. This is a little bit, kind of betraying its promise.” And then we have near the end a very dark and twisted moment. So I’m curious how you developed this modulation in tone for JAG. Whether that kind of oscillation was there in the early draft. How did this come about?

Garcia: Well…I have a question for you, Bat. The tone that you get from the beginning. Like right from the start? To me, he kind of seems broken and naive at the beginning.

Correspondent: He is broken and naive at the beginning. But I also get the sense that he’s going to try to find himself by all these pure escapades. And then he proves to be — well, instead of pushing himself to the limit, the big surprise is that he actually ends up being something of a nice guy.

Correspondent: Well, the question I have is — for JAG, that modulation in tone where he sort of becomes increasingly, where he moves into this ethical core, where he has to violate this ethical core; this whole move towards violence — was that tonal arc there in place from the very beginning? How did you work on this?

Garcia: No, I think it was. That’s what I think is fascinating. Let’s see. I think that you figured what the book was — badbadbad — thinking that premise…

Garcia: You got hit. See, I can do that. See, there’s an expectation.

Garcia: Right. But for me, badbadbad is a question. It’s like…

Correspondent: There was no question mark in the title! (laughs)

Garcia: I feel like it’s a question. It’s like: What is bad? Who is bad? What does that mean? Whose bad behavior? What is right and wrong? What is sexual morality? Is there such a thing as sexual morality? Self-destruction. Who are we from the outside to judge other people’s actions as self-destructive even if they appear that way — if it has some kind of redeeming value for them? So for me, that’s where the badness comes in. It’s not necessarily — there’s a little of “Ooo, he’s doing bad things.” But it’s not. To me, that’s not really the badness.

Correspondent: I mean, when you repeat “bad” three times.

Correspondent: There’s a certain expectation. A certain sort of assumption that “Oh, this guy’s going to go into Hubert Selby territory.” Or something like that.