Pale Young Gentlemen is a band from Madison, Wisconsin that is currently touring across the United States, and has just released its second album, Black Forest (tra la la). 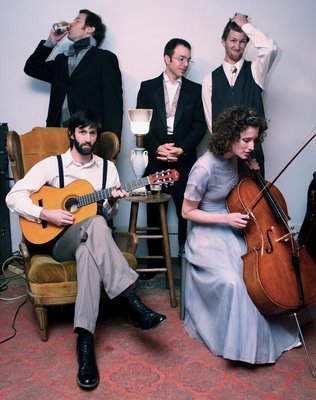 Subjects Discussed: The benefits of “Pale Young Gentlemen” as a collective noun, musical arrangement and incorporating all members of the band into a song, input on specific sounds, divine acts of percussive serendipity, the troubling connections between the lyrics of “Our History” and the relationship between the Reisenauer brothers, observing strangers who are hit by cars, Beau Sorenson’s involvement, taking time off work to write music, balancing multiple forms of employment, the band acquiring a full string quartet, the cabaret-based music of the first album vs. the string-based approach of the second, the pros and cons of taking music seriously, mixing an album in two weeks, playing with seven members vs. touring with five, Ray Davies, being specific about falsettos and slurring vocals, word mashups, vocal sweetening, Billy Joel’s AutoTuning at the Super Bowl, Bret Randall, Jackie, touring and recognition, the ratio between writing music and performing, selling CDs, relying on word-of-mouth and the Internet, and having Matthew Reisenauer handle the business end of things.