Richard Russo is most recently the author of That Old Cape Magic. He previously appeared on The Bat Segundo Show #152. 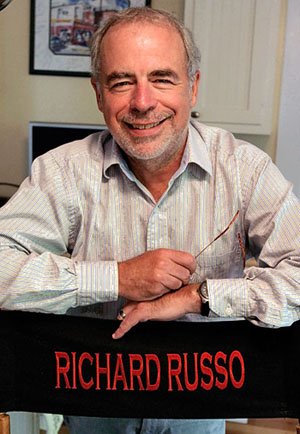 Subjects Discussed: Signs with unusual spacing, drawing from the sign at The Silver Lounge Restaurant in North Falmouth, MA for inspiration, bad driving and auto accidents in parking lots, how much Russo draws from reality vs. how much he invents, Griffin’s name, Bon Jovi’s “Living on a Prayer” and wedding rituals involving Bon Jovi, couples and homes, Griffin seeking solace in narrative, cantilevered environments within That Old Cape Magic, sloped porches, the Sagamore Bridge, why writers have to be smart enough to recognize metaphors, making the ducks face the same direction in the revision process, how a short story turned into a novel, the importance of momentum, numerous twins, a family in which every person’s first name begins with J, Griffin pelted by seagulls and rain, metaphorical symmetry, the origins of Marguerite, grief hidden from men, responding to false charges of misogyny, the difficulties of using close third person voice in relation to uncomfortable perspectives, contending with moralists who don’t like fiction, “Monhegan Light,” investing sympathy in fools, close third person narrative and authenticity, Sunny Kim’s stereotypical qualities, Edgar Allan Poe, how first-person voice may indeed “hide” similarities between an author and a character, repressed characters, shifting from writing Bridge of Sighs to That Old Cape Magic, the difficulties of telling literal truth, and imagination as subtraction from reality.

Correspondent: Was “Living on a Prayer” the tune that was more applicable to weddings here?

Russo: Ed, Ed, you’re trying to make me feel regret now, aren’t you? Because that would have been perfect as well.

Correspondent: Was it more about living than love? With the emphasis in the book.

Russo: It was the result of my wife and I having gone recently to a number of weddings and being absolutely fascinated by the way young people my daugghters’ age react to the song. Because it is so much before their time. And for a lot of young people — 28, 29, 30 — it is a kind of anthem And the way they not only know the words, they have a kind of routine worked out on the dance floor. Those in the know have this routine on the dance floor that involves the fist-pumping, which they do in unison. Sometimes forty or fifty of them, young people out on the dance floor, to a song that is just so much before their time. But they’ve adopted it. So it was a wonderful way to show a bridge between those generations. And Laura, who does such a kind act in that redeems her father, at least temporarily. It just fit that slot so nicely. It also suggests that when Griffin begins this novel, he’s had a tiff with his wife. But it’s really just a tiff. I mean, he has a kind of tenure in his job. He loves his life. He loves his wife. He loves his daughter. Everything is right. And yet by the end of the first half of this book, he’s living on a prayer. And he knows it. Whereas he didn’t in the beginning.

Correspondent: But it’s interesting. Because your timing is absolutely perfect! Recently, on YouTube, there’s this video that’s been going around, that 18 million people have seen, of this elaborate dance at a wedding all set to music.

Correspondent: Well, I know. I don’t think you’re much of an online guy.

Correspondent: I wanted to talk about the notion of the home in this book. There’s a sentiment that is expressed: “You aren’t a real adult until you have a mortgage you can’t afford.”

Correspondent: Griffin is pressured into home ownership. And he and his wife often sift through the real estate catalogs, splitting up properties into Cannot Afford It and Wouldn’t Have It As a Gift.

Correspondent: And then also, 13-year-old Sunny Kim says, “You have a lovely home,” later on in the book. Home though is not necessarily where the heart is in this. This is a couple that is united by home as a piece of property, as opposed to a place where one can establish a family. This is a couple that settles on The Great Truro Accord and actually figures that this prearranged stratagem will aid them in deflecting every curveball of life thrown their way. So I wanted to just ask you why the home, of all things — or even just property in general — would be the central place for this couple’s failure to (1) deal with life and (2) come to the real terms that they are their parents and that they share a lot of family qualities. That’s a lot of points. I’ll stop there.

Russo: No, no, that’s — yes, I’m overwhelmed by the question. The other conflict, of course, is that Griffin’s parents, of course, are confirmed renters. So their notion of a home is something which recedes before them. Like the Cape itself. I mean, home for them is a place that you can only visit. And so, for Griffin, home is something that he is really reluctant to go to. Joy loves her parents’ home. She loves the vacation home. The same home that they rent every year. For her, home is a central place, as you said. It is the place where love resides most powerfully. And I think I would also expand that to say that home, like marriage, is not just a private thing. Just as marriage institutionalizes love in some way, home institutionalizes family. So when Sunny Kim — the outsider — comes in and says, “You have a lovely home.” He’s saying, “You have a lovely daughter with whom I’m in love. You have a lovely marriage to which I aspire. You have a lovely home that I would like to live in one day and you have a lovely nation that is now my adopted home.”

So just as your question is big, my answer is kind of big. In the sense that the notion of home, by the time we get to the end of this book — especially that final Sunny Kim scene — that notion of home has gone from something at the beginning — it was two people separating real estate property on a place they can’t afford into those two categories — Can’t Afford It and Wouldn’t Have It As a Gift. And by the time we get to the end of the novel, it’s almost something that you would expect to be taken over at some point by Department of Homeland Security. (laughs)