This particular discussion was conducted in French and English. Many thanks to Aurélie Godet, who kindly assisted us in our conversation. 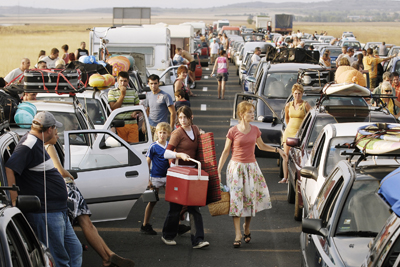 Subjects Discussed: Organizing a film that required a freeway and many cars, shooting on a Bulgarian airstrip runway, the financial impact of 300 extras driving around and using a lot of gas, how Des épaules solides gave Meier the liberty to make Home, Isabelle Huppert’s box office appeal, scenarios that are both plausible and allegorical, the deliberate blurring of time and geography, keeping the internal world and the external world from crossing or merging, establishing the family with conditions of routine, noise and accumulation, knowing the territory before knowing the characters, gathering testimony from people who have lived next to a road, the importance of mental environment, anecdotes vs. fables, Rupert Thomson, Guy Debord, Jean-Luc Godard’s Weekend, Hitchcock and The Birds, Agnès Godard’s self-imposed ban on cinematic references, Night of the Hunter, Gus Van Sant’s Gerry, and unifying ideas.