David Peace is most recently of Tokyo Year Zero. 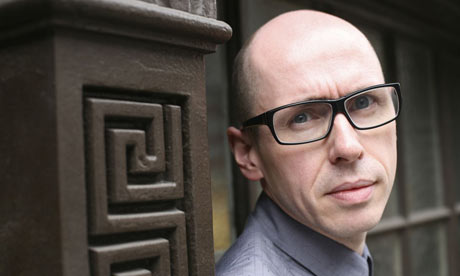 Subjects Discussed: Why it took so long to set a book in Japan, stereotypes, research, the occupation period, the effects of serial killers, language and repetition, dissociation, Japan vs. the UK, Zodiac, police investigation, the difficulties of style, comparing the Red Riding Quartet with the Tokyo trilogy, driving editors mad, Mark Danielewski, typesetting, abandoning a 80,000 word draft, defying predictability, Kabuki metal and silence as an aid to writing, Japanese symbols, women and children as victims, melding fact and fiction to get to an emotional truth, working off a nonfiction template, Eoin MacNamee, Gordon Burn, Don DeLillo, The Death of Ivan Ilyich, “practicing” passages, and the publishing industry’s obsession with “originality.”

Correspondent: Could it be said then that you’re attracted to subject matters that lend themselves more to dominantly masculine takes?

Peace: But that does not mean I am like, you know, a sexist or a misogynist. Or…

Correspondent: No, no, I wasn’t implying that!

Peace: And I know you weren’t. For the record.

Correspondent: No. I guess I’m just fascinated by — why do writers choose the subjects that they choose? Whether it’s conscious or not.

Peace: Well, this is the — the terrible thing about book tours is that you like — I’m not really big on self-analysis. You know, I write the book. And to some extent I don’t know where they come from. Or I don’t want to know where they come from. And then when you go — like this is like a three week tour of just talking about yourself incessantly. You know, some writers end book tours with nervous breakdowns. And it’s because they’re being forced to confront things that possibly they wouldn’t want to confront.