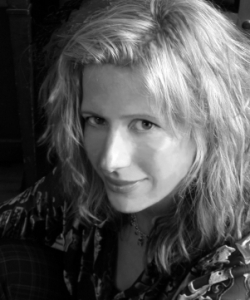 Edie Meidav previously appeared on The Bat Segundo Show #51 in a tag-team interview with Scott Esposito. She is most recently the author of Lola, California.

Condition of Mr. Segundo: Been all around this great big world.

Subjects Discussed: Returning to old neighborhoods, whether or not the first-person perspective as the most authentic method to get the reader to believe in the account, carryover between Emile in Crawl Space and Vic Mahler in Lola, California, how a third-person novel is like a panopticon, the immensity of motherhood, the chasm in American fiction between the female perspective and male-dominated, idea-centric fiction, postgender fiction, narrative stripteases, fiction as the act of omission, Freud’s dream categories, being aware of the reader’s patience, writing the equivalent of three books for every book, rewarding the reader, short chapters, failed attempts at a 250 page novel, putting the essential into a novel, Peter Orner’s The Second Coming of Mavala Shikongo, Laura Mulvey’s “Visual Pleasure and Narrative Cinema” (PDF), Eros and Thanatos driving a novel, people who read Dan Brown during a commercial break, 21st century reader expectations, Hemingway’s A Moveable Feast, writing about a place when you’re not in it, views of California within and without, Jerry Brown’s assault on California parks, living writers capable of writing a “California novel,” Aimee Bender, TC Boyle, Dana Spiotta, identities in California, “Daughter of California,” needlessly psychoanalytical readings, whether a prison cell can be written as a “uniquely Californian” one, overcrowded prisons, writers who are fascinated by twins, considering robots, the secret language of boys, tactile forms of enlightenment, enlightenment found by embracing one’s origins, false ideals and physical healing, burrito metaphors, using “she lied” instead of “she said,” readers who expect the truth, the courtroom trial as a dramatic device, whether it’s inevitable for an author to repeat herself, and overly modular attempts to explain the novel.

Correspondent: I want to ask about the dramatic appeal of the trial. There was a trial in the last book [Crawl Space]. And there’s a trial in this book. Sort of. What of the trial? It’s the ultimate way to force a character to become contrite with what he has done in ultimate sin. But I don’t know. I look at you now and I see a possible courtroom junkie quality. What of courtroom trials? Do you think that today’s novels and dramatizations seem to have moved away from this basic justice? Why trials?

Meidav: Well, that’s interesting. I mean, in a way, I hear what you’re saying. You’re saying, “Am I kind of creating a hysterical version of what is actually occurring?” It could be an ethical confrontation rather than something that confronts one of the institutions of society. Not being somebody who has spent a lot of time in any way linked to the law, I think I like playing — and maybe I’ll try and tone it down in the next book — but I like playing with society’s institutions. The prisons, the courtroom; in this book, there’s also a sanitarium.

Meidav: You know the spa? I think it interests me especially when you have such an ectoplasmic subject as California. It’s interesting to have a hard-edged setting in which somebody comes into a dark mirror moment. That said, one of my favorite scenes in literature is in Madame Bovary — to go back to Flaubert. I love this scene — and this is kind of a societal institution too — where you have a kind of village marketplace like a pig contest. A very agricultural contest taking place. And up above, you have the two lovers having this intimate scene. And it’s interspersed with this judging of the pigs. And I love that interweaving of the very small personal against the bigger habitual unseen eye of society. So maybe that’s an answer.

Correspondent: Or maybe it’s a way of turning something that is seemingly individual or personal into something that has the resonance of history. If you align a personal strength or failing with an institution, suddenly, yes, there is the societal impression! There is this sense that everything we do will matter more if it’s being judged by a jury. (laughs)

Meidav: That said, I also do deeply believe in this Wordsworth idea that in the meanest flower, a universal wind blows. So I’m hearing it. I’m thinking, “Okay, maybe in the next book, I’m going to avoid all big scenes.”

Meidav: More personal. But, you know, maybe I’m starting to lean on that as a crutch.

Correspondent: But approaching it from a different angle, it’s going to become fresh. There’s one really great early moment where the girls are stealing slices of pizza from a parlor that, if you think about it and if you want to reduce it down to its basic essence, well, it’s common shoplifting. It’s a common theft. But because of the way you describe it, it actually means something and it resonates. And I don’t know if avoiding, say, a trial or avoiding a specific element in a future book is really an honest approach if you’re writing fiction.

Correspondent: Do you think?

Meidav: Yeah, right. Because when you said that, I suddenly had this view of fiction like the mosquito eye with all its little parts. You rotate it. The element needs something different. So perhaps.

Correspondent: On the other hand, you have to be extremely reliant upon the subconscious in order to write fiction. You have to completely capitulate to the muse, so to speak, and not be aware of conscious repetition. Conscious things you may have been employing in previous books and the like. What do you do to deal with this? Do you think that the whole enormous operation of honing a book pretty much negates any concern for “Oh, I’ve done this before” or “Oh my god, Ed has noticed this from a previous book” or something like this? I mean, to what degree should it even matter?

Meidav: Do you think it’s a truism that most writes essentially write and rewrite the same book over and over and just get better at it? Until they are not better?

Correspondent: To some degree, I believe that. And it all depends on the voice. And it all depends on the ambition. I mean, some writers write the same book if you boil it down to its basic elements — even though every book will be different. I think once you strive to not do that, and I think the best way to counter that is to simply approach something perhaps as you have. An enormous mosaic of institutions with which to splay the typical into something that is a little more distinct. You think?

Meidav: You know, it’s possible. I was just thinking. You know, there are certain writers I admire. I’m thinking of Saul Bellow or others who work against this societal backdrop. Or J.M. Coetzee. But there’s a way that, even if their elements are identifiably repeated, each book they are really in a different timbre. And this is also true in a way of Alice Munro! Even though her turf is a different turf. We’re sitting in this restaurant maybe two blocks away from where, years ago, I interviewed this woman who each year — her name was Linda Montano, she was a performance artist. Each year, she would wear a different color. And that was her art. And she would have someone see her to bring out different energies. And it’s probably a question of focus. One probably brings the same understanding to what literature is meant to do to each novel. But I was trying to use Linda Montano’s words — a different shock — for this book.

Correspondent: Or maybe it’s that ambition that causes difference. I mean, okay, I love PG Wodehouse like you wouldn’t believe. But he does have a tendency to repeat some of his basic elements. But you know what? At the same time, I don’t care. Because it’s just very delightful. His sentences are so rhythmic. There’s a great sense of fun. There’s a great sense of quirkiness. Same thing goes for a lot of comic novelists. John P. Marquand, the great undersung guy who won the Pulitzer and now nobody reads. Or Donleavy, for example, who I read for the first time this year — The Ginger Man was incredible. And then I read his next book and said, “Wait, this is the same thing as the last one.”

Meidav: You know what I’m thinking as you’re talking? Maybe each author over his or her lifetime is creating rules of counterpoint. And within that, there’s greater potential tension. In other words, if you know the furniture is there, maybe you can create different kind of energy, a heightened energy, once you’ve established this is the furniture of my craft.

Correspondent: So do you think it’s a matter of every author creating as many furniture options as possible so there’s the illusion that the author is not repeating herself?

Meidav: Yeah, possibly. Possibly. I mean, that sounds so modular.

Correspondent: (laughs) Yeah, I know. It doesn’t work that way.

Correspondent: It’s not like a desktop theme or anything.