Ken Kalfus is the author of the 2006 National Book Award-nominated book, A Disorder Peculiar to the Country. 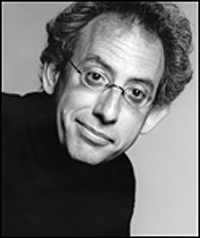 Condition of Mr. Segundo: On the defensive in relation to disorders and his divorce.

Subjects Discussed: The outlandish nature of Peculiar in relation with the more realist tone of Thirst, designing an episodic novel, the 9/11 allegory (or lack thereof), “shopping for an opinion,” soap operas, The New Republic, the hirsute nature of Harriman, character names, the list of students in Humbert Humbert’s class, obscure baseball players with really great names, starting from notes, third-person narration, Philip Roth, messy lives, death and victimization, Cantor Fitzgerald, specific sentences that kick-start the narrative, commas in sentences, rewriting, the most pleasurable thing about writing, Shakespeare, and political incorrectness and satirical limits.

Correspondent: So, for you, the sentence is more of the motivating factor than the actual plot and the characterâ€¦

Kalfus: You know what. I canâ€™t answer for everybody. I think we write because we love language. Was Shakespeare really obsessed about Denmark? About succession in Elsinore? Or fathers and sons? He had some ideas for some great lines. And he found a story that he could use. But I think all of us come to writing for the love of language. And the stories come after that. Thereâ€™s a story when I write a book or a project. But I saw a way of using language in a way that was interesting to me.