Stewart O’Nan is the author of Last Night at the Lobster. 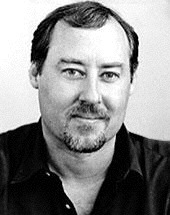 Subjects Discussed: The anonymous perception of the service sector, avoiding legal clearances from the Red Lobster, personal loyalty and honor vs. corporations, High Noon, the advantages of a setting a novel within a 24 hour period, using the present tense, collecting stories from restaurant employees, coats being sliced, the importance of cars, the sad-ass nature of the Chevy Regal, character names, working as a caterer, personal experience vs. imagination, education vs. reality, staying true to a character’s experience, Old World figures, attitudes toward the lottery, salting a parking lot vs. salting a meal, “five page” fabrications from reviewers, routine triggering memory, sugar packets vs. snow, Last Night at the Lobster as a Christmas book, Dickens, the comic nature of Christmas stories, Rudy Rucker’s power chords, hyphenated adjective-noun combos, avoiding adjectives, nouns vs. adjectives, whether Last Night at the Lobster is a novel or a novella, FSG rejecting O’Nan, working-class fiction and contemporary literature, on writing without worrying about the market, and efforts to write a different book every time.

O’Nan: Some people will say that about FSG, that it was too working class for FSG. I think that’s kind of unfair to FSG. I mean, they’ve done a lot of good work over the years. A lot of good work. No, I just think that my editor there didn’t really like the book that much and didn’t feel that they could bring it out and do well by it.

Correspondent: Was there any explanation offered?

O’Nan: No. Nothing too specific, I think. But I don’t think that they were very happy with The Good Wife, which they’d done beforehand. And we’d gone back and forth on that a lot. But, no, I don’t think there’s any lack of working-class fiction out there in American fiction. I don’t know. I mean, this story is — I think in the New York world, it wouldn’t be seen as what people call a “sexy” novel. I mean, it’s relatively low-key. It deals with characters that are somewhat overlooked, I think. You don’t see these particular characters starring in TV shows or big films. It’s a quiet story. Maybe in this market, especially for fiction nowadays, things have to be louder or more fantastic or more quirky or more fabulist. But that’s not really what I’m interested in. I mean, this book, these are the people who I really wanted to show to the reader. Because I think they’re relatively invisible and that there are millions of them out there.