Stephen Chow is most recently the director of CJ7, which opens on March 7th. Jiao Xu is the very talented young star of the film.

We are happy to report that this is our first bilingual podcast. Stephen Chow and Jiao Xu answered in Cantonese. Diane, an adept, amicable, and very helpful translator, assisted us in conducting this interview. (Thank you, Diane, for aiding Our Young, Roving Correspondent!) 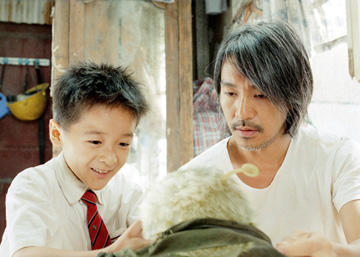 Subjects Discussed: Negotiating the gender and class distinctions of CJ7, Chow stepping back into a supporting role, working within the limitations of the family film, adjusting humor levels, caricatures and action humor, establishing father-son chemistry, the role of sound, dubbed voices, M. Boney’s “Sunny,” acting around an invisible dog, and depicting a brighter form of poverty.

Correspondent: But I wanted to ask why the poverty in this had vibrant, bright colors, as opposed to any kind of grit. Is this the kind of limitations of the family film? Or did you just want to keep the look of it right? And also, did you two go to various slums or impoverished areas to kind of get a sense of what it was to live like that? Or was this a case where the look of the house, which is all in pieces, and also has the signal that changes from night to day as well — that that location, the set itself — that you felt that that was enough to get the sense of impoverishment? Maybe you can elaborate on this, both of you.

Chow: (via translator) The first thing about poverty is — and the aesthetics that you mention — he really wanted to — I mean he says that’s not obviously a reflection of what poverty really is. And for him, he wants to adjust it so that it’s acceptable to audiences. Because it’s not a documentary. You can’t really show the kind of poverty that’s out there. So he needed to create this fantastical environment.

Correspondent: That’s interesting. Because I’m wondering. Why dwell on poverty if you can’t present it absolutely in the form of a family film? I’m curious about that.

Chow: (via translator) Well, for him, his film is really for family. And it has a lot of fantastical and fairy tale-like aspects to it. So he’s not really trying to reflect poverty as it really is. Because he understands that there’s real poverty out there. But for him, this movie isn’t in a place to do that. And he also doesn’t feel like his audiences will really accept that.

[Interjection in Cantonese from Chow]

Chow: (via translator) But he wants to add that it is based on a lot of his realities. Because he grew up poor. And the whole not having toys to play with, or hitting the cockroaches as sport or entertainment, that was really his childhood. So even though it’s not a reflection of what most people know as poverty, it’s a real poverty for him and for a lot of people he knows. So although it’s not 100 percent, it’s at a very high percentage.