The first Bat Segundo program features David Mitchell, who talked with me by telephone on October 6, 2004 while on paperback tour for Cloud Atlas. Mitchell would appear again in a two part in-person interview on Show #54 and Show #55 to discuss Black Swan Green. And he would appear a third time on Show #350 to discuss The Thousand Autumns of Jacob de Zoet, which oddly enough was discussed in its prototypical form during this discussion. 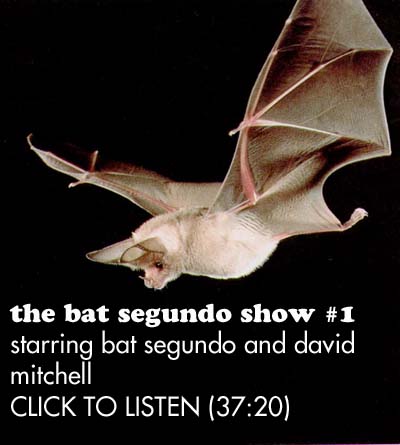 Condition of Mr. Segundo: Disoriented and quite surprised by Jorge’s enthusiasm.

Subjects Discussed: Puzzle box narratives, the deficiencies of North American reviewers, William Faulkner, the presence of islands in Mitchell’s fiction, the early roots of The Thousand Autumns of Jacob de Zoet, Thornton Wilder’s The Bridge of San Luis Rey and Luisa Rey, Stainslaw Lem’s Solaris, investigations into fate and chance, the use of corporations as verbs, Sloosha’s highly stylized vernacular in Cloud Atlas, being overwhelmed by imagination, the continental drift of language over time, intergenerational neologisms, Mitchell charting Americanisms in his notebook, thinking consciously about language while getting older as a writer, language as a mystical concept taken for granted, visual words vs. spoken words, American dialect, British linguistic purists who view American and Australia dialects as corrosive, Nabokov, dialect that’s a quarter tone out, considering a less prolix Melville, literary blogs, references to the act of writing in Cloud Atlas, Elgar, Greek philosophers using dialogue as a means of inquiry, why writers write about other artists, writers who write about writing perceived as literary masturbation (and other related taboos), David Markson, Benjamin Britten’s The Young Person’s Guide to the Orchestra, Mitchell’s “single stroke of a myopic president’s pen,” George W. Bush, humanism, the human world being made of stories, areas of existence where ideas can gem with impunity, writers compared with other vocations, why humanity needs stories, the UK cover for Cloud Atlas, Mitchell’s input on book covers, why Cloud Atlas came out in paperback in the States, and attracting younger readers. 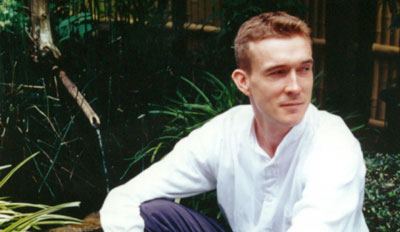 Correspondent: Do you need five minutes to get sort of acclimated? And should I call you back?

Mitchell: That’s really considerate of you. But I’ve just spent about three minutes getting acclimated and I’m fine and I’m ready to go. Full of energy and ready to sound witty, casual, and competent.

Mitchell: My pleasure, Edward. I can’t hear that often enough. Thank you very much indeed.

Correspondent: I’ve read all three of the books and I’m incredibly impressed with your talent. And it’s just been an absolute pleasure to sift through your puzzle box narratives. And I do want to say that first off. Of course, you’ve heard that endlessly, I’m sure. (nervous fanboyish laughter) But no amount of praise is good enough.

Mitchell: Well, I’m very grateful and thank you very much. And it’s very impressive that you do so much research for your interviewees. Because as you probably may know, it tends not to be the norm in North America. So thank you.

Correspondent: Yeah, I know. It’s been a mystery to me too. I have a couple of questions here I guess we can start with. First off, my question to you — and this, again, is getting into what we were just talking about, about North American reviewers — is how would you answer critics who — I’m not going to name any particular names, but how would you answer to the ones who would claim that your book is unreadable?

Mitchell: (laughs) In a non-conceited way, I’m not sure if I would answer them. If that’s someone’s honest opinion and if it’s coming from a position of integrity, then it’s simply — I can’t accuse them of being wrong. I can’t accuse them of being disingenuous. If it’s really what they feel, then I regret it. But that’s really it. That’s kind of my answer to the question really. I’m happy enough that I have enough readers and reviewers who think that the book is readable. So if some individuals feel that it isn’t readable, then I wish them happiness and a long life. I hope that they find some more readable books in.

Correspondent: Well, you can always give them William Faulkner’s answer. And that is “Read it four times.”

Mitchell: (laughs) I will store that away for the next interviewer.

Correspondent: Okay. Well, I also wanted to talk about the motifs that appear in your books. I noticed that are a lot of things — islands, in particular. You’re very interested in islands, whether it’s Clear Island in Ghostwritten, the island where Eji is in number9dream, and, of course, the infamous islands in Cloud Atlas. And I read John Walsh’s profile in The Independent [“David Mitchell: Fantastic Voyage,” now unavailable online] and apparently your fourth book [what was later to become The Thousand Autumns of Jacob De Zoet] has a manmade island called Dejima. And I’m curious as to why you seem to think, why are you attracted to islands?

Mitchell: That’s a really good one. A very good question, Edward. By the time you get to your fourth book, you notice these seams or things or motifs. Perhaps they are themetifs, where a theme and a motive overlaps. But you notice these things. They keep rearing their heads. And it’s not really because you’re consciously putting them in book after book after book. But there must be another group of mes that are inside me, who made themselves manifest when I write. In the same way that we have the common experience of, apart from ourselves, making the selves manifest when we dream. Why? You’d sort of need to ask the psychiatrists that I do not have that question, I think. A longing first…actually, if you hold on a moment, I did a short piece for a Dutch film crew who were over and were doing this really short documentary earlier in the year. And in this very notebook, I did write a short piece about this. “Islands.” [Mitchell flips through his notebook over the phone.] Is it okay if I dictate this over the phone? It’s about twelve lines long, I think, in answer to your question.

Mitchell: (reading from notebook and annotating with asides as he goes along) Islands keep cropping up in my work. I can count ten in my first three novels. And the novel that I want to start on this year will be based entirely on Dejima (a Dutch East Indies outpost in Nagasaki). My earliest books were actually maps of imaginary continents. Obviously not literally books. But that’s sort of how I, where I look back on my child forms of play. I think the part of my brain that now writes novels, that’s how it was occupied when I was, say, eleven years old or something. But my earliest books actually mapped imaginary continents. My parents were artists. So there were always big sheets of cartridge paper around the house. Just one sheet would keep me happy for hours and hours as I invented archipelagos, topologies, and poponomies. Islands are perhaps the geological expression most similar to novels. They’re both protected from and cut off from mainland reality. They often have their own customs, dialects, flora, fauna, a limited cast of characters. And the pubs have their licensing hours, by which they I mean they have their own laws. The past tense tends to be more visible on islands. Family roots tend to be deeper and more bound up in the landscape. Because it costs too much to cart away heavy rubbish. Discarded tractors, dead TVs, and so forth. It just tends to be left to decompose gently in the elements, reminding everyone of who or what it once was, like public memento moris. Lastly, it’s no accident that utopias and paradises are usually set on islands. That’s kind of what I had to say then. And I still kind of stand by that. It doesn’t quite answer your question. But it sort of hedges around it a bit.