A.L. Kennedy is most recently the author of Day. 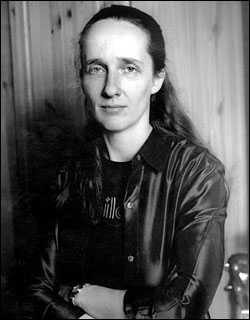 Subjects Discussed: The relationship between the style and the voice, active thought vs. the subconscious, accidental religious cues, whether Kennedy consciously writes difficult books, bizarre Monty Python interpretations, William Hartnell, Doctor Who, the necessity of cultural references in a World War II novel, the books that Alfred reads, character quirks, corporeal disguise, on not being a visual person, recognizing people by smell, sniffing and nibbling, sense language and knowing an idea without knowing why, the relationship between topography and the senses, tail gunners and turrets, the bomber’s moon, not eating for a week, the role of music, group singing, “Jerusalem,” religion and spirituality, cliches, the consoling lie vs. reality, the poetic symbolism within Joyce, dilated pupils and war veterans, the origins of Antrobus, temporal change, poetry in the two World Wars, joining the army to obtain a set of skills for life, prison life, and learning self-defense.

Correspondent: I’m curious. How did you establish how Alfred smells? I mean, what did you do? Did you just go around sniffing various old clothes from World War II or what?

Correspondent: Nibbling things? What did you nibble?

Kennedy: Oh, you know, just little corners of — I don’t want to go into that.

Kennedy: Just to get the taste of things. Cause you know…