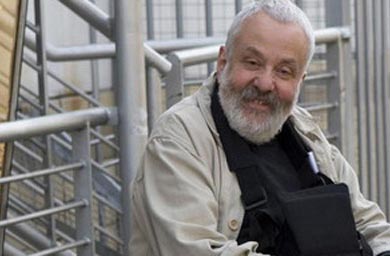 Mike Leigh’s most recent film is Another Year, which is now playing in American theaters and is very much worth your attention. He previously appeared on The Bat Segundo Show #238. There’s a very lengthy review of Another Year from October that relates to this rather unusual interview, which is part straight journalism and part performance.

Condition of Mr. Segundo: Making sure to keep the conversation under 40 minutes.

Correspondent: Are your films, would you say, a Rorschach test? The reason I ask is because two reviews I read at Cannes basically said, “Oh well. These are people who I wouldn’t want to meet at a cocktail party.” And that leads me to think to myself, “Well, actually, if that’s the case, then Mike Leigh did his job. Because he presented such vivid characters.”

Leigh: Look, look, here’s the thing about this. I’m concerned in making films that talk to people. Like anybody, I only want to talk to anybody who wants to listen, who wants to know, who wants to share, or have a conversation with me, as it were. I can’t deal with, or I can’t follow, the kind of media-obsessed, decadent position that can’t decode the film for what it actually is. Which is to say an open, honest look at real people and how real people are, with their needs and all their vulnerabilities. Warts and all. If you can’t embrace that, then go away basically. You’re quoting people at Cannes. Journalists, no doubt, who say that these are people I wouldn’t want to meet at a cocktail party. Well, you know, you’re not going to meet these people at a cocktail party. Clear off to the cocktail party and don’t worry about this sort of film. Because you’re not interested basically. And if you’re not interested, I can’t do anything about it. Real people out there. Which is to say: not journalists. People who are going to go to the movies to enjoy, be stimulated by, be moved by, be upset, be amused, whatever it is by this film. And they’re not preoccupied with all sorts of decadent media nonsense.

Correspondent: Yeah. And certainly I’m in agreement with you on that. But I’m wondering though if it’s getting harder to make these movies. Particularly with the austerity stuff that you have going on in Europe and whether this idea of depicting real life on film is becoming a bigger problem for you. I mean, you’re doing another play, I know.

Leigh: No, no. I’m doing another play for other reasons. I’m not doing another play because I can’t make a film. It’s just that the next film I make will take longer. I have plans. The truth of the matter is this film has the lowest budget I’ve had for a long time. Because of the recession. I don’t know. I can’t talk about whether it’s easier or harder. Because I just get on and do what I do basically. I never discuss the subject matter or even the style of anything of my films with anybody. We just get the money and we make the films. I just get on with it really.

Correspondent: Well, considering the actors, I know that in the production notes were very clear to point out how many times each individual cast member and crew member collaborated with you. Which I thought was actually quite funny. But I did notice that, of all the main cast at least, only three people had worked for you for the first time. And I’m wondering if that’s because of this budgetary issue. Is it harder to find actors who you can go through…

Leigh: No, no, no. It’s absolutely not. It’s not hard at all. We are blessed with huge numbers of actors who have all the time in the world. No, it’s not that. I just chose to cast the people in this film that I did. There’s no significance in it whatever really.

Correspondent: I also wanted to ask about the triangular sandwiches really quick.

Correspondent: The triangular plastic sandwiches! There’s one that appears with Joe in his office and he’s clutching it. And then we see it later at the funeral. This seemed to me a very specific choice on your part. Is it reflecting, I guess, the class that these respective characters are in or…

Leigh: Well, I mean, it may do that. But that’s not — I’ve never thought of it in those terms. That is what they would get.

Leigh: I mean, if you want to get — they take sandwiches.

Leigh: A hundred miles to this funeral.

Leigh: And you can buy them at well-known department stores. Ready packed in these hard plastic containers. That’s what they got. And the other one is the same. There’s no — I mean, I don’t think in terms of I’m making a statement about working-class life.

Correspondent: Oh, I didn’t mean that at all.

Leigh: Sorry, what did you mean?

Correspondent: I meant it as reflective of their particular station.

Leigh: Well, it is! You know, of course, what you get in my films — lots of films, but my films I’m particularly concerned with it — is the accuracy in the details and minutiae of how people live. And that’s what those sandwiches are.

Leigh: Nothing more or less. Also, there’s no Pythagorean meaning.

Correspondent: Or even an encased shroud of plastic consumerism.