Jami Attenberg is most recently the author of The Kept Man. 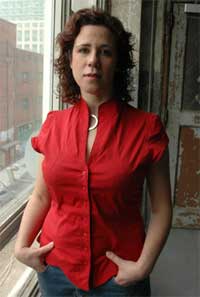 Condition of Mr. Segundo: Seduced by the Church of Tequilology.

Subjects Discussed: Adam Sternbergh’s grups article, Terri Schiavo, wondering what people do all day long, the donut girls in Greenpoint, donut shops that stick on the brain, pickup artists, describing objects in relation to their topograhical origin, having relationships with people in the neighborhood, drawing on specific aspects of the art world for fiction, levels of indecisiveness within narrative, the dreamlike state of organic writing, Charles Dodgson, photography, finding the story in revision, Richard Avedon’s In the American West, Nebraska, how Attenberg “meets” her characters in real life, the criteria of “not wanting to know about something,” the difference between the literal and metaphorical meaning of a passage, a cat that planted itself on Our Young, Roving Correspondent’s lap, passive characters, life vs. the preordained structure of a book, on not believing what reviews say, the emotional consistency of a novel, how people judge, obscenities excised by mainstream publishers, the give or take of editing, the class component, subletting apartments, neighbors who die, communicating with a next-door neighbor through IM, and contending with the unanticipated observations of readers.

Attenberg: Grups. I’m not that familiar with that term. What is it?

Correspondent: Grups. There was this big brouhaha. In fact, Neal Pollack, who I noticed that you had in the acknowledgments section, he was actually quoted in the article. It’s basically short for “grown-ups.” It comes from a Star Trek episode. And Adam Sternbergh wrote this long article bemoaning those who are in their thirties — the alternadads and that kind of thing.

Attenberg: Oh yeah. I guess it sort of started with the three men. The three kept men in the book. I really just wanted to write about them. And I really noticed a lot of people around Williamsburg, where I live. And they just seemed to have a lot of time on their hands. And I started meeting men who had much wealthier wives. And they were all sort of artistic and vaguely pursuing their path. And so I became fascinated with that.

(A longer excerpt from this interview can be found here.)