(Note: The full interview excerpted here can now be listened to as the 172nd installment of The Bat Segundo Show)

For my first 2008 interview, I met up with writer Jami Attenberg at her Williamsburg apartment. During our conversation, Attenberg’s very friendly and intelligent cat, Cracker, proceeded to climb upon my leg and claw at the wires. He then deposited his slinky corporeal mass upon my lap and, later, climbed atop the table and deliberately occluded my notes. I was then forced to wing a portion of the interview. But the cat’s daring locative intervention proved pertinent to the conversation at hand.

Attenberg’s second novel, The Kept Man, is as much about a woman’s relationship with topographical territory as it is about a passive thirtysomething drifting on the dregs of her husband’s legacy. To my mind, the two themes were linked. And during the course of the interview, I asked Attenberg about the connections between her protagonist, Jarvis Miller, and the neighborhood she inhabited. (The full interview will appear in a future installment of The Bat Segundo Show.) 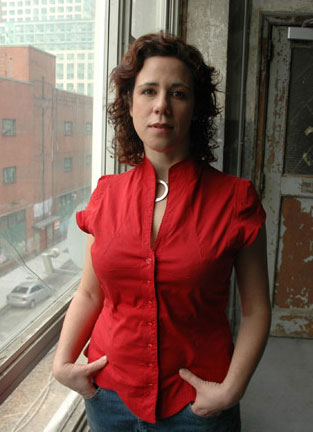 Correspondent: I’m wondering also about the Terri Schiavo narrative, because it does play in more later in the book than in the beginning of the book. Did you know immediately that there was this almost quasi-allegorical feel to that? Or did it start with the fact that you had Martin Miller in this coma?

Attenberg: It started with Martin being in a coma. I knew that. Actually, the first chapter that I wrote in the book was about the donut girls at one point.

Attenberg: That was the first thing. Because I wanted to write a little bit about the art world. I knew that. And then I knew that there was this man who was in a coma. I wanted to do that. But I didn’t know how it was going to end. I’ve said this before, but when you have a guy in a coma, you set the stakes really high like that. There’s only three ways that it can possibly end, which is that he dies, or he wakes up, or somebody kills him. Or he just keeps floating along, I suppose. But that wouldn’t be a very good ending to a book now, would it? So I didn’t know about the more political stuff until I got to the end of the book. I don’t want to give away the ending though.

Correspondent: No, no, no. We’re not.

Attenberg: But I really have no idea when I start writing a book how it’s going to end at all.

Correspondent: So you actually had sort of a mish-mash here. You jumped from Point A to Point 6 to Point Z, etcetera, throughout the course of writing these novels? And that’s how you sort of stumble upon the narrative?

Attenberg: I mean, the first two books I wrote — this is the second book — I wrote in about a year. So everything, like I said, it’s very organic. I just sort of making up things around me and putting them into a book. Eventually, when you get to the end, you filter out what worked and what didn’t work. 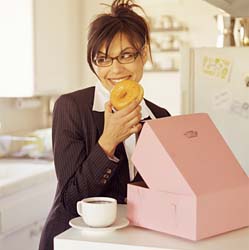 Correspondent: Okay, well, if Davis and the donut girls was one of the key starting points, was this an imagined experience? Or was this drawn from anything specific that you observed? Because I am certainly not familiar with this phenomenon. (laughs)

Attenberg: Well, you have to live in this neighborhood. It’s more north side. We’re on the south side right now. And we’re doing this interview in my apartment. And on the south side, it’s very Hassidic and Puerto Rican and Dominican, and then when you head towards more of the north side, it’s Greenpoint. And then it’s really Polish over there. So you notice the Polish girls that are out there. And some people are really fascinated and obsessed with beautiful young woman.

Attenberg: And they’re recent immigrants. And they’re definitely a force in the population.

Attenberg: There is a donut shop! In Greenpoint. On Manhattan Avenue. And it just stuck in my brain. I think I went there after seeing a rock show. So it’s sort of like that donut shop. And it just sort of stuck in my head. And I wanted to write about it.

Correspondent: Did you observe any specific pickup artists there?

Attenberg: No. I don’t even know if people really do pick them up. It was just in my imagination that they did.

Correspondent: Interesting. Or even someone constantly buying clothes and this whole modeling thing.

Correspondent: The whole thing escalating into something else. This was the imagined part.

Attenberg: But that’s no different from Jarvis wanting to be taken care of. Or these men wanting to be taken care of. That there are these people in the world who look to other people to sponsor them or meet their needs. But they provide something in return. I think I missed the point that I wanted to make, which was that, after I had all these ideas about these characters and plot points, I came across the idea of being kept or held back. Once I realized that that was going to be the title of the book and that was a major theme, then it was really to go back to move forward and make sure that every character has something that’s holding them back or keeping them into their life. That’s where it comes from. 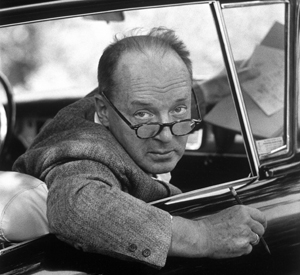 Correspondent: Going back to this issue of topography as a launching point, it’s reminiscent to me of Nabokov’s rule, where he basically said that he could not write a novel until he actually had a particular location. Likewise, in addition to this inspirational momentum, I wanted to first of all find out if this was a factor for you in terms of writing this. And it also leads into another question about Jarvis’s perspective, where she’s generally taking a small item and putting it into a larger neighborhood. For example, there’s a pack of cigarettes she observes. And she’s very clear in the way that she describes it as coming from a particular deli and how it was actually purchased and the like. So I wanted to ask you about this phenomenon. Was this a way for you to generate momentum in your book? You needed to get the lay of the land before the lay of the characters?

Attenberg: I’ve lived here for five years. And I’ve lived in New York for ten years. So, for me, it’s not conscious in any sort of way. I wanted to write about the neighborhood that I lived in. And I take a lot of pictures. I go out a lot to document. And I have a blog. So I have been writing about the neighborhood a lot. So, for me, it’s just a natural — I don’t know. It’s not like — it’s not a conscious thing. I would love to take credit for it being some sort of conscious, deliberate act on my part. I just write about the world around me. But I did feel like, at that moment I was writing the book, that there was so much going on in Williamsburg. I mean, this is a rapidly gentrifying neighborhood. Thematically, it did feel perfect for Jarvis. Because Jarvis needs to break out of something in Williamsburg. And Williamsburg was very quietly becoming something. Then all of a sudden, it burst out and there was all this development. And people were really concerned with its development. And I think people in this book suddenly become very concerned with Martin Miller’s life as well.

Correspondent: Well, concerning this gentrification, you have Jarvis fleeing — almost like the Trail of Tears — across the river. And yet, she is very taken with, for example, bagel shops. The laundromat as a kind of social nexus. As well as finding comforts in the very locations that she often despises. So I’m wondering when did you know that this was coming up. Did this come about from knowing the neighborhood or as an extension of Jarvis’s consciousness?

Attenberg: I think that, if you’re going to write a true New York story, you have to write about all of these little shops and stores. We don’t know our neighbors a lot of the time. Our friends tend to live really far away from us. Or it’s not like you can walk down the street and knock on someone’s door and see them. So it becomes really crucial where you have these relationships with a person at your bodega, with a laundromat. It’s just an interesting community. And in Williamsburg, where there’s so many different kinds of people here, and there’s this big influx of young people who really like to engage, it just seems really natural. I don’t know. That’s just my version.

Correspondent: So it sounds like it very much is a topographical concentration.

Attenberg: But she’s not me. But it’s just how someone like her would. You know, I certainly identify with her. I don’t think that I’ve ever done anything that she’s done before. And I’ve certainly never had anyone support me.