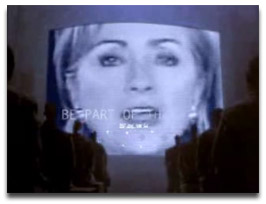 The San Francisco Chronicle‘s Carla Marinucci wants to know who created this anti-Hillary Apple mash-up, uploaded by one “ParkRidge47.” There are little clues as to the user’s identity. Aside from Marinucci, Michah Sifry has also tried to answer this question, receiving a response from ParkRidge47 that declared the video “a bold statement about the Democratic primary race.” But since ParkRidge47 would prefer to remain anonymous, I’m wondering if this might be a replay of “Al Gore’s Penguin Army,” whereby the Wall Street Journal determined that the anti-Gore video was the work of an oil lobbying firm. Is it possible that the Hillary 1984 commercial is a more clever and elaborate version of this ruse from a similar pro-Democrat lobbying firm? Until ParkRidge47 reveals his true identity, I can’t pay a lot of credence to this viral video, however entertaining it might be. If ParkRidge47’s concern is Apple’s legal team going after him, I should note that even a performance artist like Banksy had the temerity to reveal that he was the one who tampered with hundreds of Paris Hilton albums in record stores.