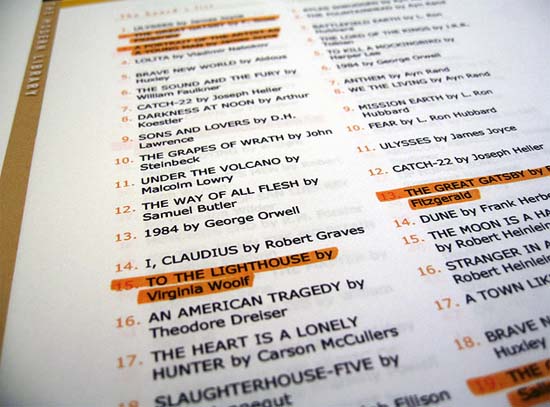 Introducing one of the most ridiculously ambitious reading challenges: a quest to read all of the Modern Library Top 100.

[NOTE: On October 25, 2013, our intrepid reader also began The Modern Library Nonfiction Challenge, a nonfiction counterpart to this fiction list.]

There comes a time when you need to raise the stakes.

I’ve stayed away from the many reading challenges offered by other book blogs. I don’t have anything in particular against these challenges. I’m delighted that they encourage people to read. The problem is me.

I like big books, but the Chunkster sounds like a sloppy peanut butter sandwich that I’ve tried to make after a night of heavy drinking. And even if I commit to the Chubby Chunkster entry level, I’m worried that I’ll be confused with a chubby chaser.

The Shakespeare Reading Challenge is more my speed, but the last time I fell down the Shakespeare rabbit hole in my early twenties, I nearly ended up in bed with someone from SCA.

The Bronte Sisters Reading Challenge has me worried that I’ll end up locking myself in an attic. I’m also concerned, that because Charlotte Bronte was the oldest living sister (dead at 38, an age not that far away from my present chronological state), the reading challenge could play out in a similar way.

A good reading challenge needs to cut across a wide swath. It also needs to be ridiculously ambitious. Like running a triathlon or climbing Everest.

The one thing I don’t like is having to read a set number of books in a set period of time. That’s a bit like filing your taxes. Shouldn’t the fact that you’ve read the books count more than the speed in which you’ve read them?

I also wanted a reading challenge that could bring different types of readers together. Those who read only some of the books can step in on individual titles and leave their comments. Those who have no intention of reading any of the titles and who simply wish to watch my slow descent into insanity can also leave comments.

I think I’ve stumbled onto a reading challenge that will take me several years.

In 1998, the Modern Library decided to enlist a revered group of writers (mostly white guys) to name the top 100 novels of the 20th century. Unfortunately, the authors that the Modern Library selected were mostly white guys. (Only eight women are on the list.) Nevertheless, it’s exceedingly difficult to scoff at a list featuring the likes of James Joyce, William Faulkner, F. Scott Fitzgerald, and Joseph Conrad.

Now the Modern Library list isn’t really a hundred books. When you tally up all the series, what we’re really talking about is 121 books. Nevertheless, 121 books — including Finnegans Wake and The Ambassadors (the latter made me dream that I was having a stroke the first time that I read it) — is a fairly hardcore list.

Now I love staying on top of contemporary literature. I also love being challenged by literature. And at the turn of the new year, it occurred to me that nobody has written at length about reading all the Modern Library books. Sure, you’ve got Christopher Beha’s The Whole Five Feet. But if we assume that 121 books have an average width of 1.5 inches, that’s 181.5 inches. Or about fifteen feet!

What I’m hoping to do here is something a bit more ambitious. I want to write about 1,000 words for each and every volume, and I want to see if I can track some quirky course of literature while I’m doing this. I’ve read some of these books; others are new on me.

But I can tell you this. I plan to read forever or die trying.

So the plan is this. Read the entire Modern Library from #100 to #1 in order (with the exception of The Rainbow and Women in Love, since the latter is a sequel to the former). In fact, at the time that I’m writing this (January 10, 2011), I’ve already read Booth Tarkington’s The Magnificent Ambersons and I’ve started to read J.P. Donleavy’s The Ginger Man. I’ll have an entry for #100 up eventually.

But in the meantime, this page will serve as an index. As I write about the books, I will add the links (along with the dates of the posts). Don’t be a stranger. Feel free to read, follow along, or leave a comment if you have additional thoughts.