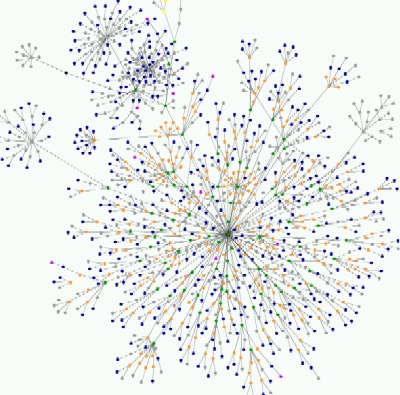 Why didn’t I know about this earlier? The Science Fiction and Fantasy Research Database (via Scribbling Woman)

Approximately 170,000 volumes and papers have been discovered in the Cambridge University library tower. Some people believed that this stash of tomes represented little more than the 19th century equivalent of the now classic 20th century pornographic confessional Fist Me Hard! Fist Me Fast! But as it turns out, this cache yielded first editions of several 19th century authors, a collection of penny dreadfuls, and the bulk of it remains untouched. And by “untouched,” keep your dirty minds out of the gutter, folks. You know what I mean. Thanks to some cash from the late philanthropist Andrew Mellon, these books (and an online catalog of these books) should be available to the public roughly around 2010.

In a development that should infuriate all midlisters starving and shivering in hovels right now, the Book Standard is now reporting that Barbara Walters walked away from a $6 million advance on her memoir. Walters was in a contract with Miramax Books, only to ditch the contract in question. Now she’s shopping around for a sum closer to Alan Greenspan’s $8.5 million advance. Of course, seeing as how Greenspan’s advance was contingent upon writing about some kinky moments with Ayn Rand, it remains to be seen what Walters could possibly pen to top Greenspan. Unless, of course, the two memoirs were to become illicitly involved, eventually morphing into one extremely salacious memoir to hit the stores later in the year.

Margaret Atwood’s Hay Journal: “Due to bureaucratic foot-dragging, things weren’t quite finished. The parking lot was a bog of squelchy red mud, the consistency my cholesterol-thickened bloodstream would be, I feared, after the binge of cheese-gobbling, double-cream feasting, and sheep’s milk ice-cream I knew I would shortly not be able to resist. Grimly smiling Welshmen were vacuuming up the standing water with giant water-sucking machines, while others spread woodchips wherever possible, singing mournful Welsh woodchip-spreading songs.”

Social Science Research Network: “This Article is as simple and provocative as its title suggests: it explores the legal implications of the word fuck. The intersection of the word fuck and the law is examined in four major areas: First Amendment, broadcast regulation, sexual harassment, and education. The legal implications from the use of fuck vary greatly with the context.” And, by the way, there are some fun footnotes and here. (via MeFi)

In a column for the Chicago Sun-Times, book editor Henry Kisor announces his retirement and has some choice words for the publishing industry:

In 1973, we still lived in a world of text on paper. Book publishing was a gentleman’s occupation that held intellectual integrity to be as important as the balance sheet; publishers sought to bring readers literary excellence while turning a reasonable profit. Now most publishers have become subsidiaries of soulless corporations that wallow in downmarket pop culture for the sake of maximizing stockholder returns.

Chip McGrath talks with John Updike. While the results are certainly better than, say, a sycophantic and humorless conversation with Sam Tanenhaus, one reads this Updike interview wondering whether McGrath was operating on auto pilot. After all, how many times does one get to talk with Updike at length? Okay, so he’s no fan of the Internet, but shouldn’t you give the man some space to ramble at length?

Not only is an observation concerning Updike avoiding cell phones in his novels not followed up on, but there’s also Updike’s self-effacing remark about how he’s “not clever enough” to write a murder mystery that stops short of a full confession. Is this current NYT interview policy? Talking with one of the most distinguished American novelists without latching onto the potential depth he’s feeding you?

Maybe McGrath had a golf game or something that day, but I have to conclude that this was a half-missed opportunity.

For those who have emailed me about this story, know that I am still pursuing it. I spoke with Millenia Black this morning and I have several calls into many parties pertaining to this matter. There is a forthcoming podcast in the works devoted exclusively to this issue, but here’s what I can tell you now:

The Great Betrayal, the novel in question, is being released by NAL Trade on December 5, 2006. The novel will feature the characters as Caucasian, rather than the suggested change to African-American.

Black claims that recent legal maneuvers spawned the book’s release as is. She told me that, outside of the change in race, she had no problems with any of the editor’s changes. (I also finally got through to the editor today and hope to hear her side of the story.)

The Great Betrayal was accepted in outline form with the characters as white. Black then wrote the novel based on this outline. It was just after Black had finished the manuscript when the character race change was requested by her editor.

There is a lot more I’m following up on here and I will present the results as they come in.

Another great character actor gone. Did you know he was friends with Kerouac?

Dan Wickett serves up an e-panel with six literary translators.

Andy Moorer is the man behind “Deep Note,” the THX noise you are deafened with just as the THX logo pops up before a movie begins. The blog Music Thing featured an interview with him in 2005, which explains how the sound was made and notes that the score is a C program containing about 20,000 lines of code. There are many other fascinating tidbits about Deep Note, including this student’s attempt to recreate it.

Angry Asian Man, the time has come for you to inveigh against this McDonald’s tie-in.

Helen Brown talks with Will Self: “Does he see himself as a show-off? ‘Definitely. Slightly Tourette-ish. Like any person who has difficulty with the normal range of relationships, I either do enormous intimacy or “wordy bastard persona.” I feel quite compassionate towards myself about it. I know what the motivation is. But as the years have gone by it has jibed more. I am essentially a solitary person. Apart from spending time with my family, I like long-distance walking and cycling. I just walked from London to Oxford in a weekend. I’m obsessed with high mileage. People ask if that’s where I do my thinking, but it’s quite the reverse.'”

So after a mere eleven years as a columnist, Dowd’s a classic?

It all depends upon your definition of “normal.”

Yes, you too can add “Host”-style sidenotes to your blog, thanks to this nifty plug-in. But what of sidenotes within sidenotes? Come on, Arc 90. We want the real deal! (Results shown here.) (via Kottke)

Dave Kehr notes (and there is also this followup post) that Jami Bernard, one of the most underrated film critics working today, has not had her contract renewed at the New York Daily News. Kehr speculates that this represents the Daily News getting “rid of one of those pesky, individual voices that keep gumming up the paper’s stated mission to be as bland and toothless as possible.” Kehr also confesses that he experienced considerable editorial interference from top brass and that this move represents an ongoing trend by newspapers to scoop up young interns who will willfully salivate over Hollywood dreck.

Having had a brief stint as a film critic some years ago, I was fortunate not to experience such treatment first-hand. (We online worker bees were permitted considerable lattitude because, even in the eyes of the money men, we were somehow considered “alternative.”) But I did have conversations with some of my print colleagues who reported variations on these battles. I can’t help but dwell on how this reflects a larger trend that we’ll be seeing from the dailies over the next five years as subscriptions plummet and advertising drops. For the arts criticism that remains, will it all come down to hiring starving students straight out of college to patch together a few reviews for peanuts? If it comes down to a climate of inexperienced writers considered as the cultural arbiters, then what hope does more legitimate criticism have in the future? Will the James Woodses, the Jonathan Rosenbaums and the Cynthia Ozicks of our world have to lower their rates to ensure that criticism, at least as reflected in newspapers, is still relevant?

An interview with MAD cartoonist Al Jaffee. (via Fantagraphics Blog)

Sven Birkets writes lovingly of Cynthia Ozick: “Ozick is not repudiating her literary mentor, but she cuffs him, and in doing so suggests — as she does in these engaged and deftly turned essays — not only that great literature can withstand sharp inquiry from readers but also that such inquiry is vital.”

One would think that Robertson’s people would have vetted this hilarious irony with their dear leader. But I like to think that there’s an insider working at The 700 Club with a marvelous sense of humor.

Not only did Clerks 2 receive an 8 minute standing ovation, but Kevin Smith has recorded an audio commentary track that you can download to your iPod and bring to the feature.

The BBC is reporting that Charles Webb has sold a sequel to The Graduate to Random House. Webb was initially reported by the BBC to be facing eviction. The book will be published in June 2007. Unfortunately, since Webb signed away any and all film rights for sequels based on The Graduate, it remains to be seen whether or not Hollywood will bestow Webb with a small stipend, assuming that someone decides that a cinematic sequel is worthwhile.

A quick reminder to all that, this week, it’s Television week (and I refer not to that ignoble, phosphor-flickering box you have sitting in the corner threatening to abscond with your time, but the novel by Jean-Phillipe Toussaint) over at the LBC. On this end, a podcast featuring translator Jordan Stump will be posted on Friday that you really won’t want to miss — particularly if you’re interested in the current state of translators in the publishing industry. 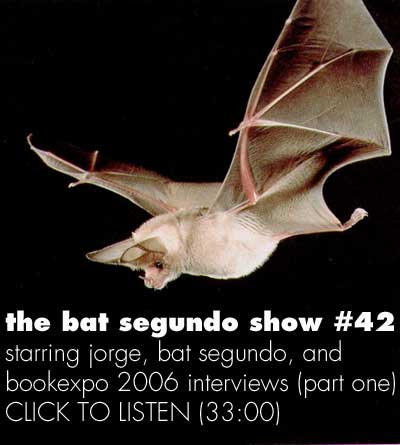 Condition of Mr. Segundo: Believing he may have hit the worst point in his life. 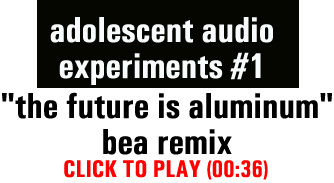 Bad enough that we’re seeing the return of Rocky Balboa. But Rambo IV? I remain curious: who exactly is Stallone’s core audience these days? Perhaps Hollywood should pay attention to the numbers:

And those are four of the last five films featuring Stallone in the star role. (The IMDB has scant BO biz on Avenging Angelo.) In other words, it is quite clear that Stallone isn’t a profitable star anymore. Or does Hollywood work on the assumption that Stallone co-hosting The Contender translates into instant revenue down the line? Or do they really believe that audiences will flock to Rocky Balboa at 1990 levels? Of course, since Stallone has kept the budget for Rocky Balboa at $24 million, perhaps this is the secret ingredient to his cinematic return. Unless he’s still huge in Europe.