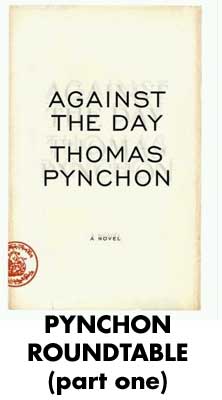 It was with great fortitude and due diligence that the New Chums of Chance, in collusion with those very active operators over at Metaxucafe, took it upon themselves to parse and digest the contents of Against the Day, a volume authored by Messr. Thomas Pynchon which thankfully concerned those unsung heroes known as the Chums of Chance during the early years of the Century Twentieth. The Chums’ Adventures, which are too manifold and legendary (some would argue apocryphal) to itemize here, are something of a footnote in the heroic ledger, occluded perhaps by the Two World Wars that came hot on the heels of their sundry journeys across several continents by way of a noble and specially equipped hydrogen airship, punctuated by plentiful barks from the loyal Pugnax. But it was with this steady spirit that the New Chums of Chance took upon the moniker, led by the Quite Balding Moderator and a not so balding gentleman by the name of Bud Parr. The first yeoman to fire the hydrogen flames and contemplate the many refractive states now long forgotten was Maximus Clarke, who as it so happens is a keen man on matters of electricity.

I had to work up some nerve to crack the spine of Against the Day, and I’ve had to do it again to get myself to commit my thoughts about it to keyboard. This is another big, raggedy Pynchon opus—the biggest and raggediest. 1085 pages, a cast of thousands (or so it seems), and a narrative spanning decades and continents… I’m still not actually sure whether it all really hangs together. Of course, Gravity’s Rainbow was massive and messy too. Still, it felt tight and contained compared to AtD. (Mason & Dixon, his other big book, was even tighter, thanks to its focus on the titular characters, and its consistent use of 18th-century language.)

A big part of reading Pynchon is decoding the allusions. I realize that the necessity of this is also a big turn-off for many people; it’s a bit like reading T.S. Eliot (although Pynchon is more fun). Of course there’s more to TP’s work than navigating the intellectual and cultural labyrinths he’s laid for us—and stopping while reading to look up every obscure reference on Google would be a drag. For the most part I prefer to let the story wash over me, and flag the stuff I don’t quite grasp for later investigation. But the references do provide landmarks of a sort for navigating the vastness of this novel.

I’m not sure how to parse the epigraph from Thelonious Monk, but I’m going to venture a guess that the ancient-looking seal on the next page is an image of Shambhala, the paradisaical hidden city of Tibetan Buddhist legend—the quest for which figures largely in AtD. As I’ve gone back over the first 119-page section of the novel, “The Light Over the Ranges”, I’ve noticed that the quasi-magical “White City” of the 1893 Chicago World’s Fair contains prefigurations of things that happen later in the story (page 23: fair exhibits featuring Mexican Indians and hallucinogenic cactus, and Tungus reindeer herders from Siberia). Both of those cultural groups are noted for their shamanistic practices. Maybe the fair is also meant to be a reflection of Shambhala itself? (There’s also a prophetic and squalid simulacrum of a Colorado silver mining camp, on page 55.)

The first lines of the book, in any case, feature the aeronauts of the skyship Inconvenience, embarking for the Chicago fair. The images of ascent and descent seem to echo the opening lines of GR (“A screaming comes across the sky”) and Mason & Dixon (“Snow-Balls have flown their Arcs”). There’s other talk of arcs, flight-paths, hyperbolas, etc. throughout the book—whether it adds up to something in particular, other than allusive density, I’m not sure.

I like these ridiculously quaint, clean-living dime-novel aeronauts. TP uses them to address serious subjects—e.g., the way that, even when trying to remain detached, we can make ourselves into the willing instruments of powers greater than ourselves, with obscure and perhaps sinister motives. But the absurd, funny, and fantastic aspects of the Chums of Chance storyline help to offset the more ponderous passages of the book. Whether speaking formally or using period slang, the Chums use stilted, antiquated phrases that add to their charm. (I loved the language of M&D for this reason, but I know some people found it unreadable.) This is also true of characters like Merle Rideout, Professor Heino Vanderjuice, and others that they meet in Chicago.

The first transition away from the aeronauts’ story to the tale of the robber baron Scarsdale Vibe and those affected by his machinations happens around page 30. Vibe is never given much of a personality; his factotum, the marvelously named Foley Walker, is more dimensional. A “foley walker”, as cinephiles know, is a person who treads across floorboards, gravel beds, strewn leaves, etc., to create the sounds of footsteps used in film soundtracks. Foley Walker starts out as Vibe’s paid battlefield substitute during the Civil War. He then becomes the corporate titan’s thuggish right arm, and virtual doppelganger. There is a karmic consequence to this doubling near the end of the book… but more on that later.

On page 45, Austrian royal playboy Franz Ferdinand, inspiration of indie rockers and (more significantly for the book) the First World War, pops up. His role seems to be mostly to get us thinking early on about the powder keg of Balkan politics. He also gets to deliver a hilarious German transliteration of hip-hop slang in a Chicago bar.

And he introduces us to another point-of-view character, private detective Lew Basnight. Basnight’s story is one of the book’s threads that strikes me as peripheral and possibly redundant. But he in turn provides a transition to Colorado, where much of the book’s action will take place.

In the vicinity of Telluride, we catch up with Merle Rideout and daughter Dahlia, and meet Webb Traverse, mining engineer and explosives expert. His religious conversion to anarchism, subsequent career as a bomber, and murder by corporate goons kick off the core plot of AtD. There’s also some banter about capitalism, silver, photography, alchemy, explosives, and the Fourth of July. There’s mail with ersatz stamps and postmarks (p. 84), which seems to be a token reference to The Crying of Lot 49. (The Mason-Dixon Line gets a shout-out a few pages later.) There’s a German bartender named Adolph, who I’m guessing could be Adolph Coors (but I don’t know who his colleague “Ernst” is).

We meet Webb Traverse’s kids, and then return to the Chums of Chance storyline for one more interlude. Their flight from pole to pole through the hollow Earth, on orders of their unseen superiors, brings us to the end of Part One.