[NOTE: The discussion can also be followed at Metaxucafe. Previous installments: Part One (Max) and Part Two (Carolyn).] 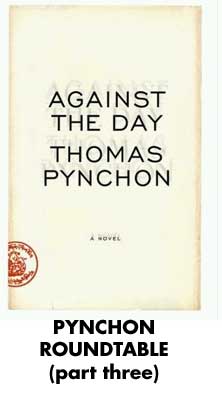 The New Chums of Chance rose further into the sky, wondering if Pynchon’s opus would take them into the heliosphere and whether the airy confines of the hydrogen airship Roundtable Discussion would cause many of them to become light of head. Fortunately, Major Megan Sullivan put a halt to the flames, pointing out to the loyal crew (all perusing Pynchon) that oxygen was becoming nowhere nearly as plentiful as it once had, and offering the following observations on Part One:

I’ve only read The Crying of Lot 49, so this is my first foray deeper into the Pynchon forest and it’s taking me a while to find a path. He keeps taking me off course, introducing new characters and ideas on almost every page it seems. Like Max mentioned, I feel the need to look up every reference on Google.

One interesting aspect of the first section was the tone Pynchon used with the Chums of Chance. They speak archaically, like Max said, with a quaint and antiquated speech. Yet Pynchon goes out of his way to contrast the goodness of the Chums with the reality of the time period. He paints Chicago as it truly was, not as how one might expect it to appear in a boy’s magazine. “Somewhere down there was the White City promised in the Columbian Exposition brochures, somewhere among the tall smokestacks unceasingly vomiting black grease-smoke, the effluvia of butchery unremitting, into which the buildings of the leagues of the city lying downwind retreated, like children into sleep which bringeth not reprieve from the day.”

And what are the Chums’ role in the novel? The Chums seem unreal. Like Socrates in The Clouds, they live in the sky oblivious to what’s occurring on the ground beneath them. Are they to keep the action moving throughout this long novel? It’s a relief to get back to the Chums after pages of introductions to new characters—they’re like old friends. It will be interesting to see how they develop in the next parts of AtD.

The Quite Balding Moderator interjects:

I’ll have more to say about the Chums of Chance very soon, once I’ve followed Mr. Parr’s prodigious post (forthcoming). But I put forth Megan’s question to Pynchonites of all stripes (including those reading this roundtable discussion): I like the Chums of Chance very much, but I feel that their presence is very much ancillary to the narrative. Like Michael Moorcock, I believe that Against the Day is very much using dime novel conventions to raise larger and serious questions about how wizards of science were viewed in the early days of the 20th century, particularly with the ragged pursuit of cash. But if the form is sprawling, with often tertiary connections among the characters, then are the Chums the clearest membrane between reader and writer? Are these “old friends” the very conduit which permits us to steer through the narrative?