[VERY IMPORTANT NOTE: In case it wasn’t clear, the Quite Balding Moderator wishes to note that this post came from the mordant wit of Carolyn Kellogg and not from his dunder-soaked head.]

[IMPORTANT NOTE (Not as Important as the First, But Important Nonetheless): The discussion can also be followed at Metaxucafe. Previous installments: Part One (Max) and Part Three (Megan).] 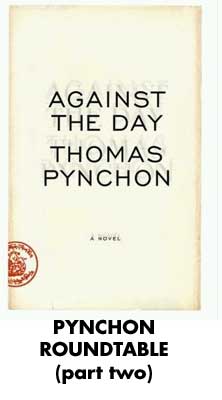 And so the New Chums of Chance continued their great rightward list (as opposed to Danielewski’s leftwrist twist) through the mammoth volume, still finding accommodations in Part One although undaunted by Messr. Pynchon’s dutiful chronicling and celeritous introduction of characters, some logged in history books and others escaping scholarly notice. Then the moment arrived in which Captain Carolyn Kellogg remarked upon Mr. Clarke’s findings — as it turns out, in many guises herself:

Big thanks to Max for parsing Part 1 so effectively. He does a great job as a reader of Pynchon. But as a currently-enrolled MFA student, I couldn’t help but wonder what would happen if Pynchon tried to bring this to workshop….

Tom Pynchon: OK, guys, this is Part One of my novel-in-progress. It’s called Against the Day. I’ll be quiet now and let you discuss.

Cranky MFAer: Part 1! This is 119 pages—and it’s single spaced. We’re supposed to go double-spaced. And our max is 30.

Chirpy MFAer: I really liked the description! But I was … kinda confused.

Helpful MFAer: Yeah, Tom? I counted and you have, like, 60 characters in 119 pages. People can’t keep track of that many characters. How about 5? Five characters? Maybe 7? Then we could figure out who is who.

Echoey MFAer: Exactly! Like, Scarsdale Vibe is the bad guy, right? But why does he need a sidekick? And you know, everyone has a sidekick? You could really pare down if you got rid of the sidekicks.

Wrong Track MFAer: I don’t mind the sidekicks, but these Chums of Chance leading everything off made me think you were writing some meta comic book. They were funny, but if you want the book to have, you know, weight, you need to signal that up front. Instead of a dirigble, maybe they should be flying something more—threatening, like a military plane. Or maybe instead of a naked lady running around below them, it should be the scientists talking about the math that you’ve put in later.

Chirpy MFAer: About the science stuff? That left me really confused. Like, is it real or fiction? Am I supposed to Google it or something?

Cranky MFAer: Yeah, you’re asking a lot of your readers. If you want them to look stuff up. Or know stuff.

Echoey MFAer: Right? Like, Chicago World’s Fair, am I supposed to know when that was? Because I get that it’s a big fair, but I don’t know if it was back in the 1980s or 1950s or what.

Wrong Track MFAer: I looked it up—it was 1893. But how are we supposed to know this from the text? Maybe you could have a billboard or something that advertises, like, Introducing the New 1893 Coca-Cola! I mean, I don’t know if there was Coke then, but are we supposed to figure out the date by just trains and a haberdashery? Or know about World’s Fairs? Because that’s pretty arcane.

Chirpy MFAer: Can we talk about the science stuff? Because I didn’t get it at all.

Tom: Um, can I say something?

Professor: Yes, Tom. That would be a change.

Tom: Well, this is only about the first tenth of the novel. I mean, there’s a lot more to come, not less. More characters, more plots, a lot more science, and yes, they all kind of ebb and flow, but the answers won’t be in part one ….

Tom is drowned out by cries of “How long?” “More characters?” “I don’t get the science at all!” etc. etc. And never returns to workshop—or public, for that matter—again.

I’m a new—and believe it or not, enthusiastic—MFA student, so I couldn’t help but read this thinking that a workshop would hate it. Pynchon does so many things that are verboten in writing class. He writes long. He writes complicated and dense as hell. Part 1 is comprehensible, but only in retrospect, really. Keeping track of characters and significant details as you go is near impossible: yet a careless ice cream on page 89 winds up having relevance hundreds of pages later. As Max said, the only way (that works for me) is to let the book wash over you and then go back to paddle around a bit.

And for my part, I promise more detailed paddling for Part 2. Which is when my reading-with-post-its really took hold.