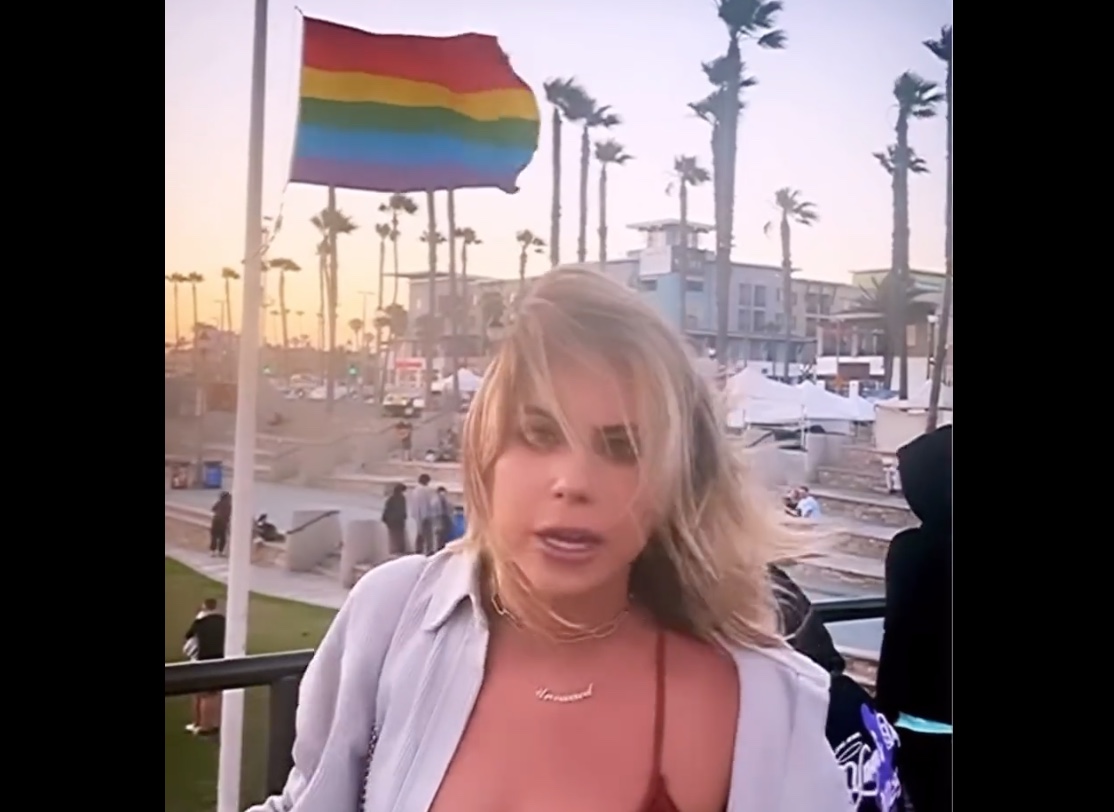 I really do try to see the best in people, but there is literally no reason I can summon to justify why the vile and pestiferous propagandist Alison Steinberg should be granted the privilege of breathing oxygen. There is nothing but evil in her heart. She is a hate-fueled, homophobic, truth-denying jackal who, like many alt-right opportunists, traded in her dubious cerebral powers to propagandize against human rights and inclusive dignity for a job at the One American News Network — which is swiftly dethroning FOX News as the venue to transform a horde of thoughtless and aging cabbages into budding fascists. Steinberg’s latest tirade, which went viral on Twitter on Sunday morning, is truly the mark of an irredeemable monster. For what Steinberg did was completely unacceptable — particularly since her bilious biogtry, directed at a harmless rainbow flag, was aired during Pride Month.

Here is a full transcript of her unhinged diatribe:

…in San Diego. And guess what I came home to be greeted with? This fucking bullshit. [points to Rainbow Pride flag] What the hell is that? Huntington Beach is the town of good old-fashioned hard-working American people, much less human. People who worked all through the COVID lockdown. Yes, that’s right. Huntington Beach never shut down through any of the COVID nonsense fuckery. And now we’re peddling this garbage? What the hell is this? The only flag that should be up there is that American flag. This is a disgrace to our city and it should be taken down immediately. Whoever the hell is running this town needs to be fired. Make America great again. Make Huntington Beach great.

This is unequivocal and unmitigated hate speech. And the timing here, hot on the heels of Justice Clarence Thomas suggesting within the hideous Dobbs opinion that an overturn of Griswold v. Connecticut (the precedent that established a constitutional right to same-sex marriage) could very well happen, is no accident.

What’s disturbing and unforgivable about Steinberg’s psychotic rant is the way that she declares any LGBTQ+ person to not be American. She is so blinded by her venomous enmity that she cannot even consider that those who aren’t straight and hetero and cis may very well be just as “hard-working” (and indeed “old-fashioned”) as she professes to be.

This is the textbook definition of bigotry. Steinberg is so hopped up on her rage that she not only wants to dehumanize LGBTQ people, but her “rhetoric” involves discluding them from the American nation. Making them invisible. Much in the way that Pastor Dillan Awes declared only weeks ago that gay people should be executed.

For all of its problems, Huntington Beach ranked highest in Orange County for LGBTQ rights in a 2013 Municipal Equity Index study. Largely because Joe Shaw, an openly gay Councilman, worked tirelessly to create greater acceptance for gay, lesbian, bisexual, and transgender people. Because of Shaw, the city of Huntington Beach became, for a time, a safer place. That is, before the atavistic CHUDs of Huntington Beach voted him out of office, forcing Shaw to flee back to the Midwest.

But for every noble Jon Shaw, there is a bona-fide mouth-breathing motherfucker like Alison Steinberg. If we lived in a condign world, she would be out of a job. Banned from all newsrooms.

Unfortunately, we live in the worst timeline. All the progress we have made is in serious jeopardy of being evaporated if we do not push back hard against true evil. We must not stay silent. Alison Steinberg is pure evil. And there is no universe in which her hatred is acceptable.