The time has come for the human population to let the recording artist who identifies herself as Madonna drift outside of public awareness. She may have been fun once. She may have inspired many girls growing up in the 1980s to dress differently. She may have let a few provocative shock waves ripple into the mainstream. But I think that now, in A.D. 2006, it can be safely stated that Madonna has now fully served her purpose and has nothing particularly substantive, daring or original to contribute to music or culture. 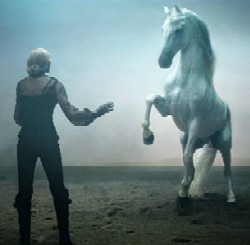 I can say this because I’ve seen these ridiculous photos and I’ve also seen Madonna live. And by live, I’m telling you that my ass was in the dance tent at Coachella. I had a pretty clear view of the Material Girl for 15 minutes of her 40-minute set, which was a bit like staring at a Thomas Kinkade painting for the same duration. The nausea kicked in somewhere around the 30 second mark.

The hope, of course, was to see what kind of performer Madonna was in person.

The answer: not much of one. Sure, she had dancers. She played the guitar (if playing the same power chords over and over, an achievement well within the bailiwick of any half-ass garage band, can be said to be the sign of a virtuoso). But I felt utterly nothing. Her set felt more like a well-executed computer program.

And I have empirical evidence to back this up. By a strange coincidence, we had arrived at around 11:00 AM on Sunday. The hope was to beat the crowd and charge my cell phone at a corporate-sponsored blue dome so that we could harass a few pals with text messages (and also to see if I could hook up with the incomparable Tito Perez). But sure enough, the Material MILF was there for what we (and several Madonna fans) thought was a routine soundcheck. The area was blockaded with yellow police tape and there were about fifteen individuals, most of them with arms locked across their chests. Okay, so Madonna needs to practice. Three songs perhaps. No more. No big deal.

The festival was set to begin at high noon. But the crowd wasn’t let past the line until 12:10 PM, meaning that, because Madonna had insisted on practicing after the gates opened rather than before, the schedule was hopelessly screwed up for all of the unfortunate bands who had to play before her. One bare-chested gentleman, who informed me that he had attended every single U.S. tour since the Virgin Tour, said that the Coachella organizers were initially hesitant to let Madonna perform because such a mainstream megastar wasn’t festival material. As it turns out, Madonna’s lack of consideration proved these dissenters right.

There was also the matter of my uncharged cell phone. But that’s a triviality.

And did I mention that Madonna started her set 30 minutes late after Paul Oakenfold cut his set short due to Madonna’s delay (and to accommodate her)? It was 110 degrees that day. We were in a tent. Madonna had the audacity to tell the crowd, “It’s so fucking hot in here!” As if we had somehow failed to espy the copious sweat spewing from our bodies or the sun digging its rays into our arms.

But here’s the thing: Madonna is no longer protean. She is no longer fresh. She has become as predictable as a Jude Deveraux novel.

Her last album, Confessions on the Dance Floor, containing such atrocious lyrics as “I don’t like cities, but I like New York / Other places make me feel like a dork,” as well as electronic samples that felt about as fresh as a soiled pair of boxers, was catchy — the same way botulism is catchy. Meaning that the tunes nestled into my head the way lice squirm through a neglected toddler’s locks. Which is to say that it took a rather rigorous procedure to get the infestation out of my noggin.

Honestly, what is Madonna’s purpose these days? How is shallow pout constructive? There were kids at the show climbing up the scaffolding. Yes, I can tell any grandkids I might have that I saw Madonna live. But I’d rather tell them how good Damian Marley was (who I URGE you to see live): a performer who really wanted to entertain the crowd, a band with a fantastic rhythm section, and an act unafraid to shake a political stick.

For these and many other reasons too numerous to dwell upon, it must be averred that Madonna is pretty much useless to American society. One hopes that she will go away, but she can’t and she won’t. What is particularly criminal is that Madonna isn’t even capable of appealing to base instincts anymore. (And that’s saying something, because this assertion comes from a fool who thought he had the stamina of a 22-year-old and was, as a result, found in a supine position, sore and nearly incapable of walking, just before Tool came on. Apparently, twelve hours of live music and almost continuous dancing will do that to you.)

Therefore, it is up to contemporary audiences to reject Madonna in all her myriad forms. Only then can the true musicians begin to rock the planet.